float through the air with the greatest of ease 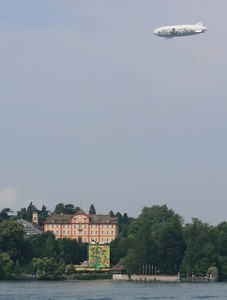 On my way home from the library last night, yet another bit about the collapsing airline industry was on the radio.

Dubbed the “airline armageddon” by blogger Lou at The Cost of Energy, it seems like passenger costs for plane trips are rising faster than anyone can book their tickets. Despite the disappointment for travelers (or would be travelers – I think of my 7 and 11-year-old nephews who might miss out on seeing very much of the world as they grow up), anyone with half a brain knows this is inevitable.

Back in May, David Suzuki said it himself:

Air travel leaves the heaviest carbon footprint among all modes of transportation and skyrocketing fuel prices are already having explosive effects…. Economists think tourism can continue to grow into infinity. But we have to realize that nothing can grow forever. This unchecked growth only accelerates us on a suicidal path.

But yesterday, when I was cruising through back blog posts at Celsias.com, a wee bit of hope for future adventures sprang up in my soul. I caught sight of a piece by George Monbiot (the writer of Heat: How to Stop the Planet From Burning

and, the newest, Bring on the Apocalypse: Collected Writing

) discussing the feasibility of relaunching airships.

I know what you’re all thinking. I know because I thought it, too. Starts with H and ends with G, right? Here’s what George says:

The word airship elicits a fixed reaction in almost everyone who hears it: “what about the Hindenburg?”. It’s as if, every time someone proposed travelling on a cruise ship, you were to ask, “but what about the Titanic?”. Yes, there was a spectacular disaster – 71 years ago. It has lodged in our minds because, like the Titanic, the Hindenburg was bigger and plusher than any craft built before it, and it was carrying rich and prominent people. The conflagration was witnessed by journalists and broadcast all over the world. It also become the technology’s funeral pyre: the Hindenburg was doomed long before it burnt, as airships were already being displaced by aeroplanes.

Granted, the solution isn’t perfect. In one of these contraptions – and four companies are working towards getting them off the ground (who knew?) – it would take about two days to get from New York to London. And the resources they would need, writes Monbiot, are somewhat scarce. But nothing in this global quandary – apart from using less and staying home (more on that in days to come) – is infallible.

Despite all our questions and confusion as we face these challenges, the article makes for an interesting read and a bit of black-and-white mental imagining of a future that might have been dreamed up by our great-grandparents, in the days before the airplane industry became the only way to go.