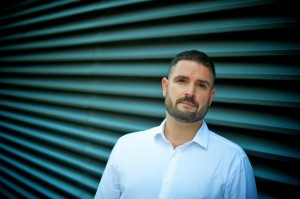 I first “met” Shawn Syms online, in the mid-2000s, through PWAC. I was attempting to make a living freelance writing in between surfing for killer travel deals and he was generous with advice and suggestions. A long-time journalist and fiction writer, his debut short story collection, Nothing Looks Familiar, came out last September. Says Kathryn Kuitenbrouwer: “[These stories] are queer in the way all our interiors are queer — radically singular, cruel, gentle, wrong, vulnerable, and erotically secret. I don’t know another writer like him for facing down the strange with such warmth of heart.”

Iâ€™ve been scribbling since I was a kid and writing for publication for nearly thirty years. Okay, twenty-seven. I grew up in the 1970s in the rather surreal hometown of Niagara Falls, Ontario. I am queer in so many senses of the word that Iâ€™ve lost count. I come from humble origins but currently have a great, well-paying job and comfortable income; my Dad was an orphan who grew up poor, but was living on his own and supporting himself from the age of fifteen. Both of these facts mean that social and economic class are some of my deepest preoccupations in both writing and life.

Iâ€™ve done both journalism and fiction, but my focuses in both genres tend to be the sameâ€”non-conformists, sexual outlaws, prisons and poverty, addiction and recovery, rebels, people who either keep or expose deep secrets, and freedom fighters of every possible stripe.

Your short-fiction collection, Nothing Looks Familiar, focuses on the downtrodden and unusualâ€”people with outrÃ© sexual fetishes and fantasies, folks with a lot more experience with drugs than university degrees. Bikers. Perverts. Sociopaths. Are you trying to be edgy or trendy?

I grew up working class. I grew up bisexual. I was bullied. Strange things have happened in my life. All kinds of people I loved have died obscenely early deaths for wide-ranging and tragic reasons. For me, some stuff that other people may find unusual is very real and very close to home. And likely as a result, Iâ€™m also drawn to people, scenarios and experiences that are both different from my own and from the mainstream. 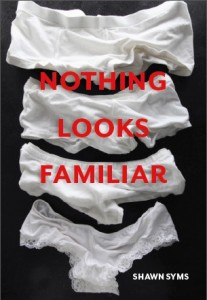 The conventional Canlit narrative of cold winters and stately wheat sheaves just does not speak to meâ€”and I know Iâ€™m not the only one. I would way rather writeâ€”and frankly readâ€”about two disabled dudes having kick-ass sex lives in their wheelchairs and using their communication devices, or a woman with HIV who is determined to have a kidâ€”than another story about a farm on the Prairies that catches on fire in the dry season.

Not only do I want to mine my own unconventional viewpoints and experiences for their inner fictional truths, I want to understand and reflect the lives of other folks who exist outside traditional social norms. Thatâ€™s a huge part of why I write at all.

Your stories do portray scenes that many of us are quite unfamiliar withâ€”women forging cheques in an apartment or the operations of a slaughterhouse. How did you gather the details to make these scenes so believable?

Iâ€™m honoured when people who read my story â€œOn the Lineâ€ say, â€œobviously you have worked in an abbatoirâ€â€”but I havenâ€™t. The story was inspired by a CBC news clip about the challenges of cultural integration in a small Alberta town where the main employer is a meatpacking plant. I read a lot of different things as input: government job-training manuals, research reports from human rights organizations, published interviews with slaughterhouse workers.

With this story and all the others, I used a mismash of strategies to gather details. Lots of internet research, lots of personality quirks either made up or yanked from my life and those of my friends and family. Judicious use of Google Maps for the places Iâ€™ve never been, including Street View.

One story, â€œFour Pills,â€ is set in Allan Gardens, a rough Toronto park where I happen to have spent a lot of time over the years. One night I wandered through the park simply staring at the ground and taking notes on what I saw there.Â [pullquote]I was trying to answer a fairly specific questionâ€”if my character had a purse full of things she found lying around in Allan Gardens, what would they be?[/pullquote] My notes from that walk only informed a single sentence in the story, but I think it was an important one in terms of setting atmosphere and mood.

The most interesting and useful research questions regarding my stories are generally the most specific ones. If I were a biker in early 1980s Quebec, what brand of beer might I enjoy? If I wanted to order an adult-sized baby onesie on the internet, what are the various style and colour options? Â What are the treatments meant to rehabilitate male sexual offenders?

Your short-fiction collection has racked up some decent critical attention. But what is something that reviewers havenâ€™t discussed that you wish they would?

From my perspective, some of the core themes of this book are sexual consent and male accountability for sexual violence. As a longtime writer and thinker on issues of sexual identity and practice, this is stuff that I think about all of the timeâ€”who has power in a situation, when is it shared, what are the contexts in which the answers to those questions are complicated? Several stories in Nothing Looks Familiar involve outright and indisputable sexual assault. And sometimes the stories include instances where consent can seem tricky to ascertain in the midst of overt power imbalances.

I see my book as part of a continuum of Canlit that includes the work of the genius Barbara Gowdy â€”whose work includes an account of a female necrophiliac and a sympathetic take on a child abductorâ€”and writers like newcomer Chelsea Rooney, whose daring debut novel Pedal tackles the thorny topic of pedophilia. Although my stories are not overt lessons and donâ€™t spell out ethical dictates directly, itâ€™s my sincere hope that my underlying moral compass is apparent to both readers and critics.

Youâ€™ve got a fair bit of Canlit lit-crit experience as a reviewer yourself. Any favourites? Any pet peeves?

Iâ€™m a big fan of contemporary Canadian writers with sensibilities that go beyond the easily predictableâ€”Greg Kearney, Dionne Brand, Jessica Westhead, RM Vaughan,Vivek Shraya, Cathy Stonehouse and Alexandra Leggat, for example. Iâ€™m a major fanboy of Steven Heighton and, as previously mentioned, Barbara Gowdy. Iâ€™m really wary of work that is overtly sculpted and precious and/or relies on directly explaining to the reader how she should react to or understand what has just happened in the narrative. A lionâ€™s share of literary first fiction published by the mainstream Canadian presses tends to fall squarely into that category. 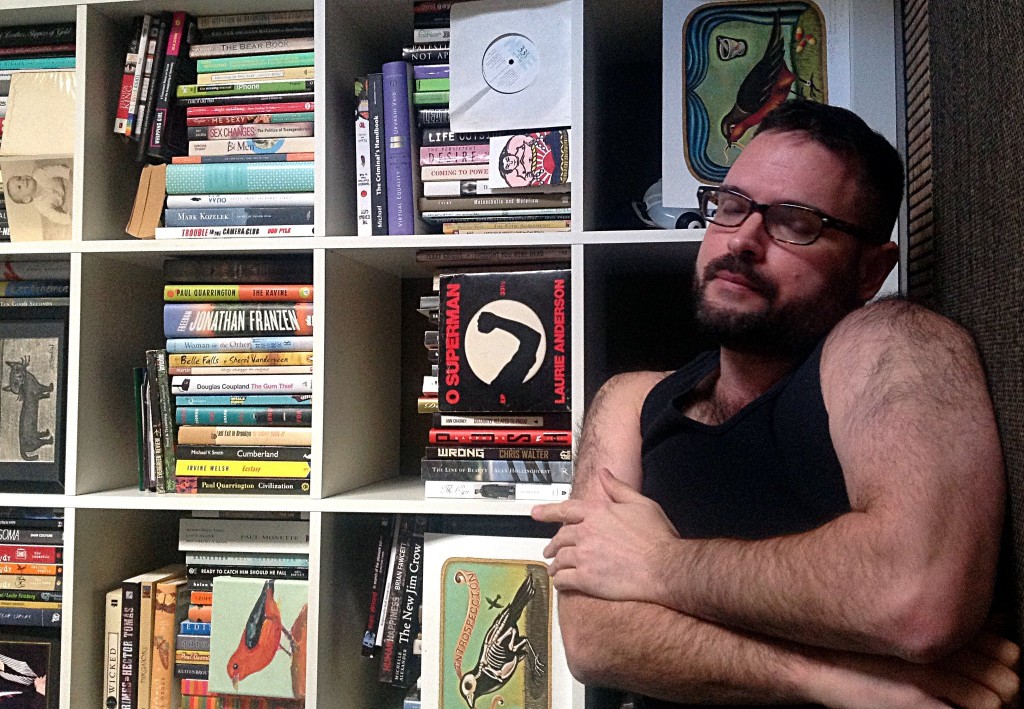 Shawn cuddled up with his books

One notable aspect of your collection is that the stories are set in far-flung places across Canada. Are you some kind of frequent flyer, or VIA Rail Points junkie?

This just sort of happened as the book evolved. I didnâ€™t want the bookâ€™s stories to all be set in Toronto, where Iâ€™ve lived for over twenty-five yearsâ€”in the same way that I wouldnâ€™t want every story in the book to be about the coming-of-age of angsty young white males. There are stories in the book set in Ontario, BC, Quebec, Manitoba and Albertaâ€”both in cities I know very well and others Iâ€™ve never seen. I was proud when my story â€œFamily Circus,â€ concerning a drug-addicted cheque-forging ring and set in Winnipeg, was published in the Winnipeg Review with minimal edits, even though all the local details were not things Iâ€™d ever seen with my own eyes.

Tell me about a sentence that has particularly affected you.

â€œAbuse in all its inevitably intertwined formsâ€”institutional, political, structural, psychological, and interpersonalâ€”is ugly.â€ If Nothing Looks Familiar makes it out of its first printing and gets a reprint, Iâ€™d like to use this sentence as its epigraph in subsequent editions.

I believe this to be a deep truth. Itâ€™s from the introduction to Righteous Dopefiend, an ethnographic study concerned with the lives of homeless San Francisco men and women who use crack and heroin daily. Although the book is pretty academic and can be densely theoretical at times, itâ€™s characterized by its authorsâ€™ shared passionâ€”and ethics. Philippe Bourgois and Jeff Schonberg spent years with the people they write about, and while articulating their own thesis, they manifestly care deeply about a fair, reasonable and sensitive representation of their subjects. In my best moments, I hope to do the same.

Next month: Catherine Bush, a novelist whose work has been called “structurally daring and psychologically penetratingâ€ (Padma Viswanathan, The Rumpus).