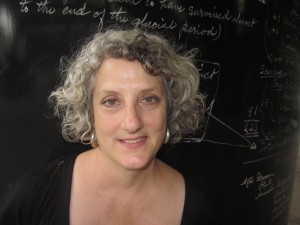 Nancy Jo Cullen is the author of Canary (Biblioasis, 2013), which won the 2011–12 Metcalf-Rooke Award (“this book is intoxicating,” said judges Leon Rooke and John Metcalfe). She’s also published three collections of poetry, and was the winner of the Dayne Ogilvie Prize for Emerging LGBT Writers in 2010.

Where do you come from and where are you now?: I was born in 1962 in Fort St. John, B.C. I am the seventh and last child in my family, born seven minutes after my twin brother. My mom didn’t know she was carrying twins and when they told her there was a second child she began to cry. This is not to suggest she didn’t get over that and love me just fine.

My parents were devout Catholics so I grew up in the church going to mass weekly and Catholic imagery informs a lot of my work, although largely from the perspective of a pissed-off ex-Catholic.

My family moved to the Okanagan when I was nine; I went to college in Nelson and moved to Calgary (after a brief stint in Vancouver) when I was 23. I lived in Calgary until my mid-forties when I moved to Toronto to complete an MFA in creative writing at the University of Guelph-Humber.  I thought we’d just be in Toronto for 3 years but I fell in love and we stayed. My partner Helen lives in Kingston and we manage a long distance relationship for the time being. When both of my kids have finished high school (3.5) years, I’ll move to Kingston where I imagine I’ll live until I croak.

My siblings (and many dear friends) are all out west so I continue to make regular visits to Calgary and in many ways still consider myself an Albertan, but I’m grateful for the hot, humid southern Ontario summers and the (usually) milder winters. I’m looking forward to Kingston which reminds me a bit of Kelowna in terms of climate and size and proximity to lovely water.

You’ve written short fiction, drama, and poetry. Do you prefer one over the other and why or why not?

I would have to say that right now I am preferring fiction (I’ve recently completed a draft of a novel as well). I suppose this is in part due to the fact that it’s newer and therefore more fun at the moment. Not that I would describe writing a novel as “fun”. More like terrifying – the constant not knowing what the fuck I was doing. Short stories, in form, are more similar to poetry in that they need to slough off any extraneous writing to work well while novels can meander around an idea. Plus you can’t just keep editing a novel if you want to finish it. You have to leave so much bad writing in the file. It was very uncomfortable. 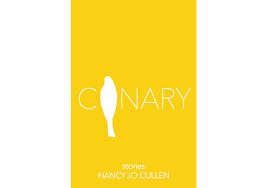 I like the tightness of time that exists around a short story (and a poem), and by that I mean I like that I can finish a story or a poem in days or weeks. A novel, in its clumsy, first form must exist for months and months.

I’ve said nothing about script writing. I love dialogue but am not so drawn to writing drama any more. I guess I prefer working on my own. Certainly as a single parent, it would have been very hard to work in drama and be at rehearsals and such while children needed food and conversation. Now, I mostly feel past it and not so interested in it.

If you had a different career what would it be?

But really the very first thing I remember wanting to be was a saint – if you can call that a career. I realized very early on – long before I discovered sex – that I wouldn’t be up to all the fasting and temperance and sacrifice that is demanded of saints. I suppose that’s when I began to consider movie star as a career. Of course that went out the window as soon as I realized I would have to live on 800 calories a day. It was too much like being a saint.

I considered teaching school and took some classes with teaching in mind but I didn’t feel I had the commitment to be a decent teacher.

What makes you laugh?

I like a good joke as much as anybody but mostly I find mundane, everyday things pretty funny. The way my kids think about themselves now that they’re teenagers can be hilarious (when it’s not extremely annoying). People who take themselves too seriously, my own self-importance. I like to take the piss out of things that scare me.

When I was 14 my dad was diagnosed with multiple myeloma. It was a terminal diagnosis. My family got a lot of big laughs out of the following six years. I suppose it’s how I learned to cope. We managed our mom’s end similarly. She had dementia but was rarely paranoid and able to make many jokes as a screen to cover up her failing memory (not that she was able to cover it up). She was, as a nurse friend described her, delightfully demented. So, I suppose it’s in my genetic make up to laugh at the worst possible things.

What makes you cry?

You know, I don’t really like to cry. Of course, a funeral of a loved one will get me, but generally I’d rather laugh at something terrible than cry. When my son was three and getting rid of his soother I let him “pay” for a toy with it. When I passed the soother to the clerk and told him to throw it out I started to cry. How stupid is that? 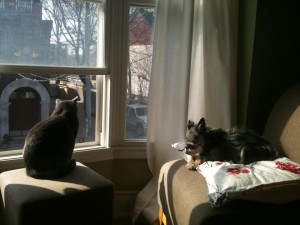 Ali, the cat, and Esme, the dog

Dogs or cats and why?

Dogs because they’re outrageously loyal. I would never, ever be as nice as a dog so it’s good for me to spend time with dogs. Plus, they’re pretty good at just finding joy in the moment. Not my dog so much, she’s filled with anxiety (a Chihuahua/Minature Schnauzer mix) and so she has a lot of knee jerk reactions due to her over vigilance. But my partner’s dog knows all about having a great run followed by a long nap mixed up with some cuddling. Still my dog is loyal and sometimes looks up at me like I’m the best thing since raw hamburger.

Cats come in a close second. My cat is a mean barn rescue and keeps our house vermin free (worth the price of food right there). But, I’m allergic to cats and shouldn’t really live with one. Fortunately my cat only likes me for my food so I don’t have to pet her. She loves my son though. He walks into a room and she’s all, well, hello there and digging her claws into him – in the loving cat way, not the vicious cat way. 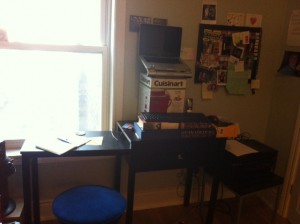 What are you wrestling with in writing craft right now?

I am always wrestling with discipline. My life is filled with distractions and sometimes I let them carry me away, so discipline is always a big one for me. And everything I said previously about the novel. The long form is terrifying and sticking with it through distraction and across the space of months and months and months has been much harder than I would have guessed. I had to discard the practice of trying to get it just right before I moved on.

You’ve been praised for mixing humour with darkness in Canary. This is tough to do. Any advice?

I think that mixing humour with darkness is just how my brain functions. It’s not something I necessarily try to do and so I’m not sure what advice I would give.

I would say don’t force it but look toward your characters without judgement then let them say (and do) the kind of terrible and stupid things we all say all the time. Sometimes it will be funny and sometimes it won’t.

I think it’s important to not take ourselves  and our characters too seriously. Don’t judge what you’re writing. Not before you’ve finished a first draft at any rate. Also, some people aren’t funny and that’s okay too. Funny people can be a real pain in the ass, don’t forget that. Don’t be a pain in the ass.

What was the worst advice you ever received?

My mom used to say: Never let people know they’ve hurt you. I practiced this for a long time but now I would say tell people when they’ve hurt you. Now I believe that letting people know how they effect you is much better than pretending they’ve had no effect. Now I believe there’s no shame in having hurt feelings and that pretending you’re not hurt just makes the hurt last longer. Also, anyone in an AA meeting could tell you that pretending things don’t hurt is a piss poor approach to coping. That only took me about 45 years to realize.

Is there a sentence you read this week that you could share? What is it from and why do you love it?

I just read Roberto Bolano’s Antwerp. There were a few lines in that little book that I really liked. One was “always clowning on the brim of hell”, and the other was “over her head was the green awning, and, above that, the summer.” I like them both for their imagery, the second image is particularly pleasing to me, the first more like something I would consider sage advice – when on the brink of hell, clown, clown, clown!

If you like this, subscribe for more interviews with writers, guests posts, and writing news from the wild north!