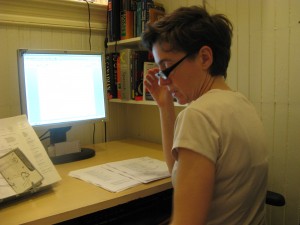 I’m a Franco-Ontarian, former catholic, former journalist from Blind River, Ontario. I learned Spanish in my 20s and used it to live in Mexico City and rural Honduras before coming to Vancouver to do a Creative Writing MFA. I planned to flee this city upon graduation because I’ve never felt at home here. But I met my husband, Adam, before that happened. Now we have two kids, Merle and Lewis, and the only downside is this endless reckoning I have to do with the unhomely West Coast. I’ve been working as a freelance editor for 10 years now, while writing and publishing fiction and poetry. If anything defines me, it’s where I’m from.

Does writing in English induce guilt for a Franco-Ontarian like you?

Always. Forever. I was a devout child. I believed most of what I learned in school, which was French catholic. I attended at the tail end of the era when the church was at the centre of life for the francophone minority in Northern Ontario. My teachers taught me that francophones had been looked down upon and persecuted by the English, and that it was therefore our responsibility never to assimilate. I turned this lesson into a religiously inflected moral code—which, I see now, had lasting consequences for my politics. But it was also tricky; it took me until my forties to take that code apart and recognize francophones as part of a relatively recent, white, resource-extracting settlement of Northern Ontario, which Indigenous groups had always controlled. None of that matters one bit, though, when I run into someone at home and can’t show them a single thing I’ve written in French. 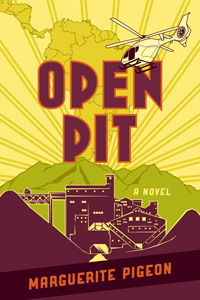 Tell me about your hair.

Why, thanks for asking! I consider hair to be one of the best ways to partake in fashion. It’s so easy to change, and so forgiving, because it always grows back. I have had nearly every hair cut and colour available in the past twenty-five years. Right now, it’s short, with lots on top. My sister-in-law Colette calls it The Lyle Lovett.

Why do you write when writing is so lonely?

I just recently realized that I fooled myself about this aspect of writing. I’m highly social, and most of my life has been frittered away talking with my friends and family—happily. I love to talk. But when I was small, my family was always around me in large numbers. My few stabs at writing back then were probably a way to find a modicum of solo space. Later, when I worked in daily news, I was endlessly surrounded by journalists. Again, I turned to writing as a counter. In both cases, I had NO IDEA that if I made writing my mainstay, it would no longer be a break from the crowd; alone would be the norm. Discovering this has been a shock. And it may ultimately require me to change the kinds of writing I do. Maybe there are collaborative forms I could take up. Otherwise, it’s too much aloneness.

If you could change something about your writing practice, what would it be?I would like to work less hard on my writing. By that, I don’t mean putting less thought into it, or making fewer attempts to make the writing good, honest, vital, etc. It’s always hard work. But I could afford to do less of what my friend Anar Ali and I call “beating the horse”—me being the horse. I think I could enjoy my work more, and suffer less if I let go a little. This would be a big change, however. Not at all easy for me.

How does it feel when you complete a writing project?

I wrote several drafts of my first novel. After each draft, I read through to the end and cried. Quite passionately. And not only out of sadness for the ending, but for myself, for the work that no one else can see that goes into writing. I felt like it was a conversation I was having with myself—hearing myself cry was consolation and release.

What’s more interesting to you as a writer: youth or middle age?

I spent a lot of time around older people growing up, especially my grandmother and great aunt. And I’ve often said that I am a 50-something-year-old woman trapped in a younger person’s body. Recent brushes with ill health have shown me how laughable this idea has been: I am only now beginning to understand what it means to be an older woman. I have had many prejudices—as we all do about anyone older than we are. Still, I enjoy thinking about age, its psychic encumbrances, and its strained, but unique freedoms. I rarely wonder what goes on in the heads of 20-somethings, and I don’t read many books about them. 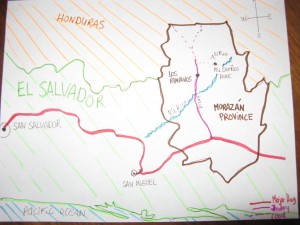 One of many maps Marguerite drew of the fictionalized area of El Salvador where Open Pit is set,

As I said earlier, I am defined by being from Blind River probably more than by anything else. This was the 1970s. Pre-internet. Pre-cable TV even. My family did not travel. I grew up in the same house that my father grew up in. I was completely immersed in the social, geographical and historical elements that made up life in this one working-class town. Oddly, I think that isolation led to a high degree of social exposure for me. For example, in high school, while there were obviously many groups, there weren’t enough of any one kind of kid for anyone to completely seal themselves off into, say, a “Goth,” or “Punk” scene, as happens in larger schools. We mixed. And, desperate for any kind of fun, we went out. To endless school dances, and to house parties, beach parties, cottage parties—anywhere we could take one another on—perpetual engagement. It was intense for me, and marking. I have not written about home directly, but I feel like most of what I know about people I learned there. So, Blind River is in everything I write.

I don’t often turn to particular quotes or excerpts from other writers when I write. But I do love the work of Marcel Proust and have been slowly inching through In Search of Lost Time. You can pick just about any page from any volume and find something good. Here’s one that feels like it’s about writing: “Knowledge of the thing cannot impede it; but at least we have the things we discover, if not in our hands, at least in thought, and there they are at your disposal, which inspires us to the illusory hope of enjoying a kind of dominion over them.”

Marguerite Pigeon is the author of Open Pit, Inventory, and Some Extremely Boring Drives (forthcoming, fall 2014). Order direct from the independent publisher or through your local bookseller and help support Canadian bookfolk and wordsmiths!

Like this? Please share or leave a comment! And if you have a book out (or a debut scheduled to launch) and are interested in being involved, read the details here and get in touch!