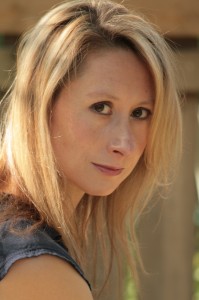 I’m a Toronto-born Transylvanian who immigrated to St. John’s, Newfoundland, two years ago. It was the best decision I could have made. I brought my two children with me and found two more waiting for me here on the other side of the Cabot Strait—along, of course, with their father, who was the main reason for the move.

You might think taking on so much change all at once would be bad for the writing, but you’d be wrong. I remember thinking, There is this whole world of people in their mid-to-late thirties, people with children and careers and mortgages, who will never do this, and it’s incredibly freeing – just quit your life and move to an island in the middle of the North Atlantic.

It helps that I grew up in a big city, I think, and more than that, that I grew up an only child in a family that traveled a lot. I spent serious time in Europe as a child, in cathedrals and museums and privately-owned castles and also in brasseries and supper clubs and at the opera. It’s possible that for me, the most exotic thing I could do was really ground myself in the new world. I love that I can leave my house and walk to the sea.

What did you want to do when you grew up? Is the answer, Writer?

It isn’t. I wanted to be a lot of things. I remember wanting to be an actor very clearly and later I wanted to be a diplomat. Then an international lawyer. When I was young, it was acting or else maybe a spy, like Mata Hari – which is actually a kind of diplomacy, I guess, depending on how you look at it.

But I did make books from a very young age. I’d make my mother staple together a bunch of paper and then I’d illustrate it profusely – this was before I could make letters. So when I was, say, three, I’d make all these books and then I’d spread them out on the lawn and run up and down the sidewalk in my bikini, yelling, Books for sale! Books for sale! Only five cents a piece!

As a book marketer now (in my day job), I have to say this is not a bad strategy.

What is the bane of your existence?

Time. Time and schedules. I always think I have another five minutes, or enough time to finish just this one last thing, and I never do – this is why I am generally five and ten minutes late for pretty much everything. It must drive people nuts. My partner seems to love me very much; despite this love, he is driven crazy by the lateness. I know he is.

I think people who are on-time for things perceive the lateness of others as a kind of slight, or a sign of disrespect, but it is purely a lack of comprehension about how time works.

When I lived in Toronto, downtown, I had this theory that it took twenty minutes to get anywhere. This is erroneous. It takes twenty minutes just to get to a subway station. 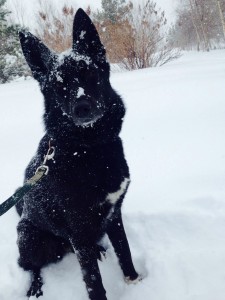 Will you ever write another poem?

I don’t know. I started in poetry and published poetry in magazines for more than ten years before I switched to fiction. I wrote okay poems. I think I was competent. But I think I don’t understand poems, not the way you should. I feel like when I’m working on a story, I basically understand what makes it good, what could make it better, how it works. That makes fiction writing more compelling for me, and also much more fun and interesting.

I hear you have one million children. How do you cope?

I choose chaos, most of the time. Or I pretend to myself that I have chosen it, which is just as good. We have four children between us, and the age range is wide – the youngest is six, the oldest sixteen. I also brought a dog along with me, and she’s an energetic, vocal, lovely, nutty border collie. Who sheds. So that adds some extra to the chaos, too.

As much as I hate trying to keep up to other people’s schedules, I like setting my own, so I do a lot of that. When things are busy I have a day schedule planned out the night before, starting with the 6 am wake-up and 8k run and stretching right through work and school and extra-curriculars and beyond. I’ve learned that any pocket of time is good, usable time. So the ninety minutes while a kid is at judo or dance class, you can get a lot of work done in that ninety minutes, if you can score the right arm chair at the coffee shop. 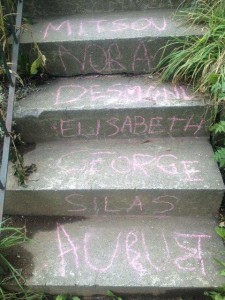 The sidewalk-chalked front steps at Elisabeth’s house, shared with poet George Murray and their four kids

I’m also very lucky to have an incredibly supportive partner who really helps me carve out time for my writing and also just for myself. I think there’s nothing more important than that.

Here is a writing question: which geography works best for your writing?

I’m more of a binge writer. So while other people work really well by locking in the same one-or-two hour block every day – like, you get up at 5am and write until 7am, every morning – I don’t do that.

What’s productive for me is working in a very concentrated fashion, for days or weeks even, and then doing something completely different for a while. So I’ve rented cabins in the past, even for just three or four days, because I find the solitude is really good for me, and the lack of neighbours.

Solitude not because of being alone with my thoughts, but because it’s the only time I can do that guilt-free. (I was a mother of two by the time I was twenty-six and there is a part of me that is really defined by that; I always feel like I’m supposed to be looking after someone).

I can work well in strange cities if I have to, and I find long flights oddly useful, but it’s for the same reason – anonymity. In the end I always find other people distracting.

If I really need to concentrate, I’d rather be out in the country with just the dog, in a place where no one knows who I am.

Please share an inspiring sentence. What is it from, and why do you love it?

I often get hooked on something and talk everyone’s ear off about it and then move on to the next thing. So it’s hard to come up with just the one sentence for all time.

Writing a novel made me do a lot of thinking about novels as a form and what they do and how they work and why they work, for the reader and perhaps for the culture, since we seem like them so much (at least in recent times).

The question was made deeper for me because the novel I was writing used some very real history as a backdrop – most pointedly, the Paul Bernardo arrest in 1993, but there are several real cases of abducted girls that appear in the book. Russell Smith wrote a Globe column sometime over the winter, concerning verisimilitude and fiction. He was comparing the recent trend of autobiographical fiction to the series finale of Breaking Bad. While you couldn’t say that the television series was actively realistic, the story was compelling. And isn’t that what stories are supposed to do?

It’s not exactly plausible that all those things would happen, but we want them to, so they are satisfying. It’s not real, which is why it’s exciting. Autobiographical fiction can never do these things, because our lives contain few endings or even resolutions of any kind. Artifice is at the root of art, and art needn’t be ashamed of its artifice. – Russell Smith

The book I was working on (The Devil You Know will be out in January 2015), while grounded in a very real, early-90s Toronto, is a literary thriller, and a thriller needs that artifice. So that column gave me a kind of post-project permission, and it’s something I’ve thought about a lot.

Aside from that, the one line I think of most when I’m writing came from my MFA thesis advisor, Dionne Brand: Say what you’re going to say. It’s probably the best writing advice out there.