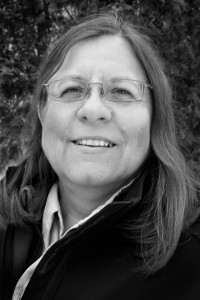 I first encountered Donna Besel in Flin Flon, Manitoba. She was up north with a couple other writers giving readings, and I remember how she spoke of her growing understanding of her work being rooted in the boreal forest landscape. Since I’d started writing my way back into the Canadian Shield – my own formative terrain – this intrigued me. We’ve come to be friends since then, and last spring she published Lessons from a Nude Man, a collection of short stories that “balances audacity and forthrightness, hilarity and sadness, strength and vulnerability,” according to the Winnipeg Review.

I am a boreal writer. I am also a survivor. I learned, in my forties, that I have something to say and I have the right to say it. This awakening happened after the prosecution and conviction of my father for the sexual abuse of me and four of my sisters. This legal ordeal contributed to my husband’s death; his family shared a similar history of sexual dysfunction. He did not survive their outrage and fear.

Why are the stories in Lessons from a Nude Man set in and along the edges of the boreal forest?

I know the setting well. I grew up in Whiteshell Provincial Park, at West Hawk Lake, right next to the Ontario border. Our family visited Kenora for doctors, dentists, and shopping. As kids, we spent our spare time roaming around in the bush, swimming, hiking, skiing, camping and canoeing. I only lived in cities, Winnipeg and Brandon, during university. During the summers, while I attended university, I worked for the Parks Branch in the Whiteshell. After graduation, I taught in Powerview and then lived in Lac du Bonnet for thirty-five years. I now live in St. Georges, on the Winnipeg River, near Powerview-Pine Falls. (All of these places are in or on the edge of the boreal forest). 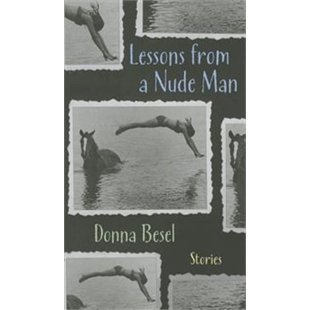 How and when did you start to identify as a “boreal” writer?

In 2012, Prairie Fire put out a call for writers who lived in or wrote about the boreal forest. I qualified on both counts. They published two issues, connected to the Boreality Project, an artistic initiative which included photography, sounds, music, and writing from the boreal forest. Prairie Fire’s interest in my stories about the bush helped to clarify that I am indeed a boreal writer. Manitoba has writers who identify as prairie, Mennonite, urban, Indigenous, or some other designation. I have never heard any other writer identify as boreal, but it certainly suits me.

Why do you weave such a surprising combination of sadness and humour in your stories?

I love the mixture of sad and funny. I find that life often throws both dynamics at us, sometimes within minutes of each other. For example, when you joke at a funeral and can’t stop laughing because you feel like bawling. I enjoy Miriam Toews’ writing; she combines both with great skill. I think of the term “bathos,” the idea that things can go far beyond pathos to become hilarious. Many oppressed cultures use humour to deal with trauma (Irish, Jewish, Indigenous, for a few examples).

How did you become a published writer later in life?

Several years ago, my publisher, Hagios Press, initiated a program for new authors, called “Strike Fire,” and my collection of short stories, Lessons from a Nude Man has been produced through this series. After my husband died by suicide, at age forty-five, I started to write in great amounts. It helped that local schools did not want to hire me as a teacher. (Their reluctance arose from the mess created by the suicide). I slogged along for twelve years, developing my writing voice and my profile in the literary community. Getting published takes a lot longer than people think. Friends have asked for years about the arrival of my first book. When I explain the difference between self-publishing and publisher-publishing, they look at me like I’m selling them a piece of swamp in the boreal forest. 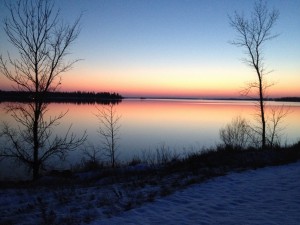 The Winnipeg River, near where Donna used to live, the night before freeze-up.

Why do you write?

Through years of work, and therapy, I learned that I write for the writing. It makes me happy. When I’m not writing, I feel restless and slothful. Publishing is exciting, but writing is what matters most.

How do you share your love of writing with the larger community?

I work in Manitoba Arts Council’s program called Artists in the Schools. Teachers from across the province can look in MAC’s directory and then pick artists from all disciplines for residencies of week-long segments. I enjoy it because I get to talk lots about writing and it reminds me what I need to do every time I sit down to write. I also have instructed in shorter school programs, adult workshops, and retreats.

One of my favourite writers is Alice Munro. Her stories are straightforward, in terms of language and sentence structure, but they stay with the reader forever. Recently, the Winnipeg Free Press published a review of Lessons from a Nude Man and the reviewer compared my stories to Munro’s. Needless to say, I was thrilled. I like to think that my writing is simple but runs deep. I also love Munro’s linked stories and I have written two manuscripts using this technique. I reread Olive Kitteridge by Elizabeth Strout to remind myself how brilliantly they can work.