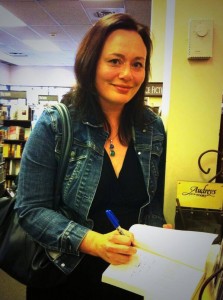 This week, the Firelight Interview Series launches with Diana Davidson, an Edmonton writer who released her first novel, Pilgrimage, in September 2013.

Read about her desire to get back to Paris, the unusual name of the hero in her next novel, and her pride in “nailing the horse’s ears” at the end of Pilgrimage.

How has your career progressed, and what are your hopes for the future?

I’ve had a few different jobs, careers really, and books are always the foundation. When I was a kid I wanted to be a ballerina and then an opera singer — neither of which panned out but I think I was drawn to both because I love stories.

I grew up in a small town in Northern Alberta called Beaverlodge. I moved to Edmonton when I was 18 to do a BA & MA in English Literature at the University of Alberta.  I then went on to earn my Ph.D. in literature at the University of York in England and when I was finished, came back to the U of A as a postdoctoral fellow and then Instructor in the English department and the Writing Studies program.

A series of events led me to look for a more permanent day job (even though I love, love, love teaching) and I was lucky to become the Director of the Public Library Services Branch with the Provincial Government in 2010.  So even though I no longer teach books and writing, I get to work with people from all around the province (and country) who believe that books and reading are important and who take it as a-given that public service, public and equitable access, and intellectual freedom matter.

I have a little boy, Ewan, who is “seven-and-a-half” and is the light of my world and my most important teacher.

As for the future? I want to get back to Paris and drink good wine in a restaurant near the Opera House; I hope to continue to work in public library service; I will write more novels; I aim to learn a few Blue Rodeo songs on guitar; and I’ll do everything I can to raise my son into a kind, smart, dynamic man who wants to make the world a little bit better in whatever way he sees fit.

Pilgrimage is set in 1891. What is the most powerful challenge when it comes to writing novels set in the past?

When you write in the present, in contemporary times, you take the details for granted. You don’t have to second-guess if a character has a cell phone handy when their car hits a moose, and you can add details of how they hear a WHAM! song in the drugstore when they go to buy something intimate. You don’t have to research if you could buy nail polish in Edmonton in 1892 or how a person would claim scrip and for how much and what that amount of money would mean.  And yet I loved the research part of writing Pilgrimage. I learned a lot about the North West and about what life could have been like in the 1890’s here (for women especially). It gave me a new appreciation for the place I call home, the freedoms and services I rely on, and a new admiration for the women who came before me here.

What is the most surprising thing about publishing a first novel?

How happy people are for you.  It has made me realize how important books and stories are to so many people and that is just a wonderful, wonderful realization.

At my book launch at Audrey’s (the last remaining independent bookseller in Edmonton) we had over 100 people attend. It was amazing.  I knew most of the people who came — my family drove in from Northern Alberta, as well as co-workers and friends I’ve made in recent years, as well as some people I hadn’t seen in many moons.

There was one man who came up to get a copy of Pilgrimage signed after I read and I asked his name and thanked him for coming.  He replied, “I always like to come and support new authors.  Writing a book is an amazing feat.” I was just so touched by that comment, you know? It made me want to write more books.

Are the names of the characters in your novels important?

Some of my characters in Pilgrimage have two names to reflect that identity-theft that happened during colonization.  So Mahkesis is also Adele and Okiniy is also Angelique.

Even the characters who only have one name have a symbolic name: Moira is a Gaelic variant of Mary, Georgina and James are nods to the British monarchy, and Gabriel’s name is explained in the middle of the book but is also the name of the angel in the Book of Luke who tells Mary she will birth God’s son.

In my next novel, the main character is a teenage boy named Rumi. I chose this name to harken to the Afghan poet and also to reflect that the boy’s father is a rather hapless literature professor who gives his son this complicated name that makes him stand out in Northern England.  When I read, I love to dissect names of characters and layer them with meaning.  I try to do this in my own work in a way that’s engaging but not heavy-handed. 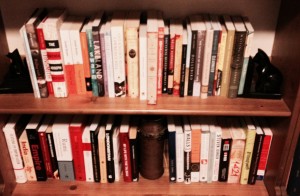 Diana’s bookshelves: Can-Lit and writing about First Nations, Metis and Inuit history and by Aboriginal writers.

How do you organize your bookshelves?

It’s my own hybrid version of Dewey (I work with libraries after all).  I theme my books and then alphabetize them by author. I have a shelf devoted to books I used during my Ph.D. (on AIDS narratives), a few shelves devoted to CanLit, a shelf of books about Rumi and 9/11 that I’m using to write my next novel, a shelf of books about Marilyn Monroe (an obsession), and a shelf devoted to signed copies and books by people I know.  I love my bookshelves. They bring me comfort and remind me why I write.

What is the best question anyone in a book club has ever asked you?

I was recently invited to this book club made up of entirely of men who meet in a loft in the club founder’s garage. I kid you not.

Anyway, “Cliff’s Book Club” is this group of insightful, smart, funny guys who like to read and who’ve hosted such Edmonton literati as Lynn Coady and Thomas Trofimuk as well as visiting Writers-In-Residence from UofA like Camilla Gibb.  I was thrilled and a little intimidated to be asked to come talk about Pilgrimage with them.  It was so affirming. They asked really engaged questions.

One that stands out was, “Are you a horse person? The details about the horse’s ears at the end of the book were bang on.”  It stands out as I really know very little about horses, and despite growing up in rural Alberta, can count on one hand the number of times I’ve ridden a horse.  The question stuck with me as it meant I’d gotten not only the details but the feeling right.  And that’s important as writer.

You grew up in northern Alberta and continue to live there. How has this environment impacted your work?

I think that for many people, the place where you grow up shapes you.  I love to read work by writers who have that intimate understanding of where they’re from and can create that place on the page for their readers — writers like Flannery O’Connor and Margaret Laurence for example.

I’ve had the chance to live in England and travel in Europe, the Caribbean, South America, Thailand, Singapore and Egypt.  I love travelling and experiencing newness and yet it’s also made me appreciate where I’m from and where I live. And for me, Northern Alberta is a harsh, beautiful, raw place that offers such diversity: from the boreal forest to the pockets of prairie, from the First Nations cultures to the post-war settlers, the Vietnam draft dodgers and the people following the oil boom, from the Edenic summers to the isolating cruel winters.  Northern Alberta is a place of extremes, opportunity, and necessary closeness.

I like to say my writing explores the violent intimacy of everyday life.  I think this interest comes from growing up in a small place in the North.

What are the challenges of being a writer and the most important attributes to remaining sane in the profession?

Oh, the challenges.  Where to start? (laughing).  Writing is such a cornerstone of who I am and how I try to understand the world so the challenges are just part-and-parcel.  A musician friend recently asked me “why do you write?” And all I could say in return was, “Why do you play?”.  If I don’t write for a few days I start to get anxious, emotionally itchy, restless.  Writing is integral to who I am.

Is there a sentence you read recently that you could share? What book is it from and why do you love it?

I’m reading Irish writer Edna O’Brien’s autobiography Country Girl.  She’s a bit like an Irish Alice Munro from what I’ve read of her work and can glean from this autobiography.  Anyway, the sentence from her book that has punched me in the gut (so far, still reading) is: “I clutched at the thin grass and looked up at the few stars, wan and isolated, and thought that there would be happier lodgings and starry nights, and did all I could to stifle the sobbing” (109).