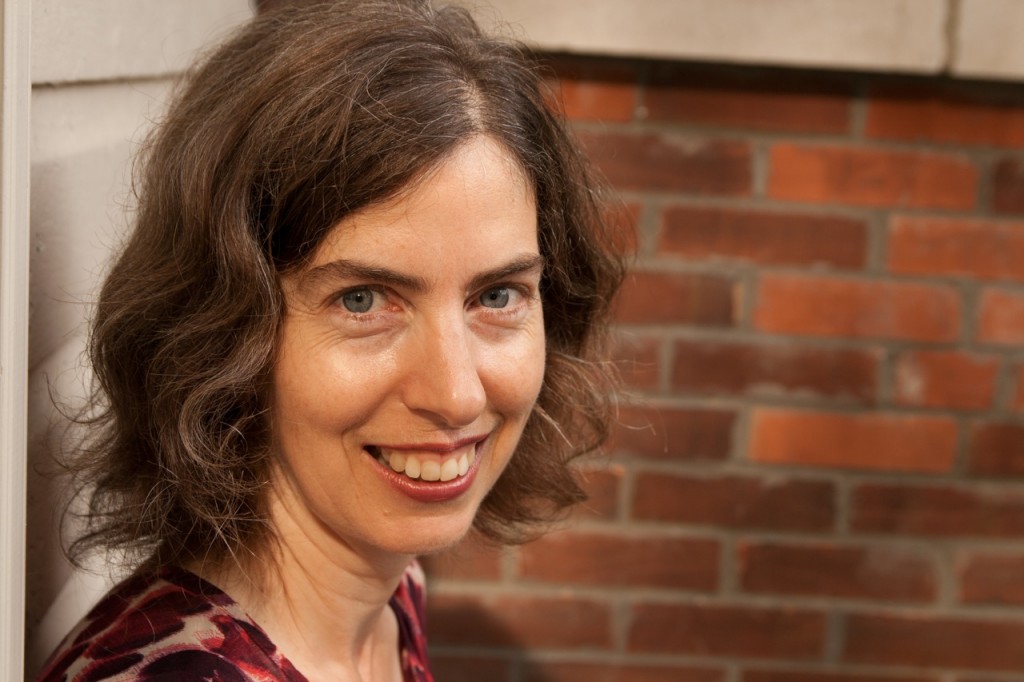 Catherine Bush makes me think. I first met her during my time in the Creative Writing MFA program at the University of Guelph and, like the best writers and teachers, she offered questions to inspire deep consideration of the practice of writing and the writing life. This winter, I spent a week with her latest novel, Accusation, which tells the gripping story of a journalist’s efforts to uncover the truth about the founder of an Ethiopian children’s circus troupe who is accused of sexual and physical abuse. Quickly, I became immersed in a story “rich with questions and complexity” (Vancouver Sun), and was happy to have the opportunity to ask her a few questions about the book, her writing life and her inspirations.

It’s night and I’m sitting on a kneeling chair at my desk on the third floor of my house in Toronto. My beautiful dog is curled up on the sofa a floor below, my partner with her. There’s a hooked rug hanging on the wall before me. It depicts part of a yellow house, laundry in flight, a wind-tumbled sea and sky. It’s one of the portals to the novel I’m working on, my fifth, about a climate change scientist, set on a fictional Fogo Island off the coast of Newfoundland. To be a writer is to be caught up in the verb: to write. I write. I search for things that come alive in words. People, animals, the wind, worlds. Yet by the time you read this, something else may feel as true as these words do right now. I’m interested in these questions: what makes writing feel alive? What does it mean to believe in a work of art? How can we make the absent feel present? Writing is a way of paying attention. Paying attention is what life requires of us. Tomorrow, because it’s Monday, I’ll put on my other hat, which is that of Coordinator of the Creative Writing MFA at the University of Guelph.

In your most recent novel Accusation, the narrator Sara is having a long-term affair with David, a married man whose wife is undergoing cancer treatments. They seem almost guiltless in their relationship yet I found myself accusing both of them as I read. Is this something you intended?

Accusation is a novel in which every character inhabits a morally dubious position. No one is guiltless. That is to say, everyone is guilty of something. We are all guilty of something even if we don’t always acknowledge it. Accusation is a novel about the way we judge others that also enacts the problems and perils of judgement. It invites the reader to judge the characters and consider the risks of judgment, especially in the face of life’s terrible complexities. Sara, a journalist, is searching to find out the truth about a man who has been accused of physically and sexually abusing children and teenagers in the circus he has founded in Ethiopia. She is also trying to give this man, Raymond, a chance to speak and potentially defend himself. Yet her search, and her writing about the case, will have unforeseen consequences. She’s also having an affair, as you say, with David. Sara’s own life trajectory has been altered by being falsely accused, while a university student, of stealing a wallet; the case goes to trial. Her self-defence is suspect. She’s wounded by the experience. Her capacity for intimacy is wounded. It’s easy to judge affairs. It’s easy to judge an affair like this one. Yet life is full of unusual relationships and accommodations. I wanted to look inside one and push against the instinct to judge, even condemn. Why do people do such things? I was thinking of long-term affairs like the one the married New Yorker editor William Shawn had with writer Lillian Ross. I recently did an event at which a man commented that he had been prepared to judge the characters and then listened to a story on the radio about a similar affair in which the wife was ill, as David’s is, and instead found understanding, including for David’s wife who knows of the affair and in a sense allows it. Life is complex and judgment is easier than empathy. It doesn’t ask us to alter what we think or who we are.

Sara’s need to find out the truth about Raymond Renaud verges on obsession in Accusation. As the novel progresses, she seems to slowly give up everything else in her quest for the truth. How does this compulsive drive for honesty reflect the novelist’s experience?

Sara’s motives change over the course of the novel. She begins by feeling an uneasy identification with Raymond. She’s spent a night driving him to Montreal. She herself has been falsely accused in the past. She doesn’t want to rush to judgment. How can she make space in herself for his possible innocence yet give credence to his accusers? This is a question that pursues me: how can we or can we hold someone as 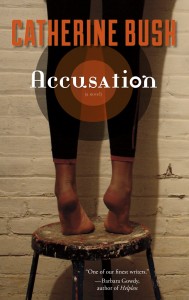 innocent and guilty in our heads at once? Sara wants to hear Raymond’s story even as she keeps discovering things that suggest his potential guilt. Yet when she achieves what she thinks she wants – finding him, hearing him deny the accusations – nothing is resolved. In fact, her writing about the case makes things worse. She finds herself wracked with guilt, trying to figure out if her actions have helped destroy an innocent man or a monster. As a novelist rather than a journalist, I’m writing the complex story that Sara, as a newspaper journalist, can’t. While writing the novel, I tried to limit myself to what Sara knew. I didn’t want to be certain of Raymond’s guilt when she wasn’t. The novel is written from deep inside her consciousness. Yet it was a constant question for me as I wrote: when did I have to make up my own mind about Raymond’s guilt?

There’s an early conversation between David, Sara’s lover, and Sara about why dictators like Saddam Hussein, Lenin, and Goebbels would write creatively. Sara says, “Maybe there’s an impulse toward poetry not only as something potentially beautiful but also controlling, a way to give formal shape to experience, emotion, rhetoric, and so sway people.” Can you talk about this controlling impulse in writing, how writers attempt to shape what people feel or think? Is there danger in it?

Convincing someone to believe something is one powerful element in fiction. As a writer, I want readers to believe in the world I’m creating and its characters. There is an element of control, yet the relationship is profoundly collaborative. My words are nothing without the reader’s willingness to recreate my world in her head. I’m taken with Sara’s question about the desire by tyrants to write poetry. Her answer is my attempt to understand that phenomenon. As a writer, however, I’m deeply drawn to the ways in which fiction can gesture to the unknown, to mystery, the absent, the uncertain. This is something that Accusation attempts: how do we respond when we can’t know for certain if someone has done something. How do we respond in life? And how do we respond as readers when we encounter this uncertainty in a narrative? As readers, we also want answers. And we may expect it from a novel. Yet there’s a realism in depicting the problem of not knowing that compels me as a writer. I’m asking the reader to join me in this unstable place, which is an invitation rather than a controlling gesture.

Before I read Accusation, I read Kate Atkinson’s Life After Life (in which, of course, the main character, Ursula’s, life alters again and again, as she dies over and over). It struck me that this novel says something profound about what it means to believe in fiction as if were real, because if we did not enter the world of the story with conviction, the alterations in Ursula’s life would hold no meaning. The same is true for accusations. If we don’t believe them, they lose their power. Did you consider the parallels between these (fictional truth and the truth of an accusation) when writing the novel? 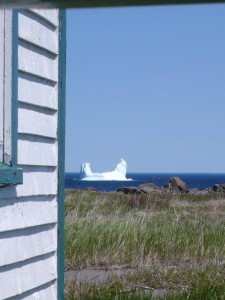 An iceberg off Fogo Island

I’ve thought a lot about the parallels between stories and accusations. As soon as you hear an accusation, you are compelled to imagine it, like a story. Actually, I don’t think accusations lose their power if we don’t believe them. They linger. They are dangerous stories that have a life separate from their truth. They make us curious. We often approach accusations from the position of not knowing whether or not they’re true. And then there’s the place of desire. We believe things, or entertain a belief in something, because we want to believe it. Because it makes a better story. Or because we want a particular version of the world to be true. It confirms a version of ourselves. (I think of this in relation to climate change denial. Deniers don’t want humans to be responsible for the devastating rise in carbon levels that may destroy life as we know it on the planet because it means their way of life and way of making money must be stopped.) I’ve gone into classrooms to talk about Accusation and asked students to describe what makes them believe someone who’s trying to convince them of something: what is it about body language, tone of voice, the way someone narrates their story – too lucidly or not lucidly enough. And then we discuss what makes a story on the page convincing. How do we enact conviction as writers and communicate conviction to our readers? I also point out that conviction, which we want to feel when we read, also means to be found guilty of something.

Is there a sentence, book, artist’s work, film, or artwork that has particularly inspired you lately?

I’ve been reading Rachel Cusk’s new novel, Outline, which is extraordinary. It breaks so many rules or, let’s say, expectations we have about novels. It’s fiction but gestures towards autobiography, only the narrator is deeply opaque and becomes most visible through her narrating of other people’s stories. She sits beside a man on a plane on the way to teach a writing workshop in Athens. She meets people in Athens. She sits around a table and asks her students what they noticed on their way to class. The recounted stories are often relayed in summary that sometimes slips into direct speech. While the experiences within these stories are differentiated the voices all sound like the narrator to me. She sometimes makes pronouncements that I don’t always believe yet they convince me as truths nevertheless. None of this should work. The voice is terribly restrained yet invokes terrible pain, and the aftermath of broken marriage, and the narrator’s urgent need to make sense of her own broken marriage. The novel never announces this. It’s the work of a mature artist: lucid as glass, honed by trauma, gesturing always towards what can’t be spoken of directly. It’s inimitable and exciting, exciting because inimitable.