Andrea Thompson made a name for herself as a spoken word artist long before ‘poetry slam’ became a household phrase. Now, she’s turned her talent with words to the long form, with the release of her first novel, Over Our Heads. 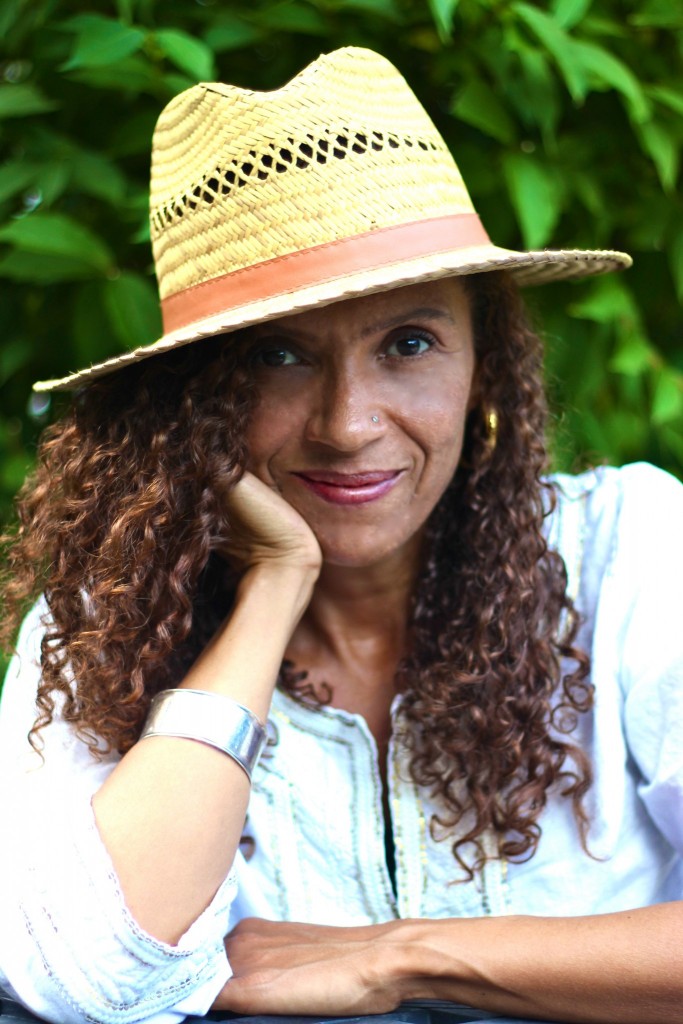 I’m a brown kid called Andy, sitting on the curb with her best-friend Julie Kagayama, singing, “Look At Me, I’m Sandra Dee” and “The Hills Are Alive”, until either the neighbours tell us to shut up, or the street lights go on.

I’m the little girl tucked in bed, listening to her grandmother concoct adventure stories about inquisitive children in spooky old houses with secret doors and magical gardens – because we’ve finished all the C.S. Lewis and I am hungry for more.

I am the hung-over teenager, covering my ears on Sunday morning as the sound of Ella Fitzgerald and Louie Armstrong blast from my grandfather’s new HiFi.

I am the young woman who went west on a whim, and met her totem animal during a hallucinogen-fueled spirit-quest on an endless beach in Tofino.

I’m the woman who declared at thirty that I was going to be a poet when I grew up.

And I’m the middle-aged writer who sits here now, typing this – watching the way the past bubbles and brews into the stew of the present tense.

I’m the mind, stilling to listen to the wind blowing secrets through the trees outside my window. It’s early afternoon on Canada Day, and the hum of the city is quiet and contented. I am thinking about the writer friend who will come over for dinner later. The salmon I will cook. The wine we will drink. The laughter that will make our faces hurt. The stories we will tell.

I read online that “the concept for Over Our Heads evolved from Jane Austin’s book Sense and Sensibility, where two dissimilar sisters create contrast and tension as the book’s main characters.” Can you talk about this inspiration and how it lead to the novel? 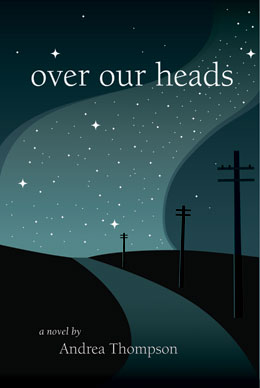 I loved the way Austin’s Elinor and Marianne Dashwood bounced off each other – the way they showed idealism and realism in a kind of inter-relational dance, and I thought it would be a fun idea to play with. Also, I’ve always loved books about families – their dysfunctions, politics and generational patterns. I think families are ground zero for our ability to understand how our past and our perceptions colour our world.

In your novel, Over Our Heads, you explore topics as diverse as cosmology, physics, astrology and telepathic communication with animals. Can you tell me what led to you exploring these topics?

I wrote Over Our Heads as a thesis for my MFA Creative Writing degree at the University of Guelph. I loved the structure of school, but found that between schoolwork, writing and doing work to pay the bills, I often felt stressed and like I just wanted to turn off my mind for a bit. This desire led to an obsession with animal documentaries. I watched pretty much every BBC documentary narrated by David Attenborough, and then I shifted gears and became obsessed about cosmology. There are some really amazing documentaries about cosmology online, and I watched as many as I could. This led to a fascination with physics and off I went learning as much as I could about that.

At the time, I felt a bit guilty that I was spending so much time studying these science topics instead of editing my book, which was completed at that point, but to me, seemed a bit lacking – the characters didn’t feel fully developed. Then one day, I was doing a talk with students in Lillian Allen’s writing class at OCADU, and Lillian said something that struck a chord in me. She said, “Whatever your passion is – whatever you’re thinking about and obsessing about while you’re writing, is feeding your art.” This was like a light bulb going on for me. I went home and took out my manuscript and suddenly knew what it was missing. I needed to fill in the gaps in my characters with topics that I could dig my teeth into. I wanted to write a book full of things that I loved to think about.

One of your two main protagonists, Emma, is of mixed race heritage. Can you explain the role race played in the construction of your characters?

The issue of race was important for me to address in the construction of characters. To me, it seems that if the race of a character is not mentioned, or made clear through description, often the default is to imagine the character as white. I wanted to circumvent this, and also to create a character that resembled my own bi-racial background. I decided to keep the specifics of Emma’s racial background ambiguous to show the reality that many mixed-race people deal with of being mis-identified. I have had people assume I was everything from Malaysian to Mexican, which can be interesting or annoying depending on the attitude of the person doing the assuming. 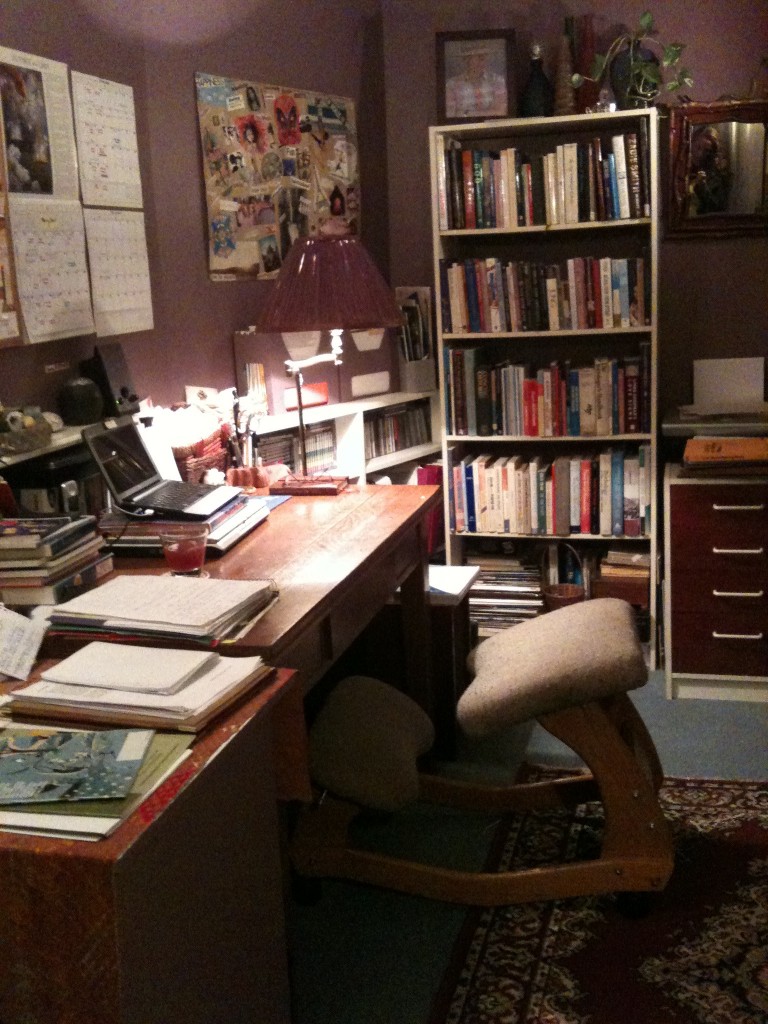 Do you have an “ideal reader’?

For Over Our Heads, my ideal reader was poet and former Queens University professor, Elizabeth Green. In the gap between the time that the novel was accepted for publication and the moment when I began working on it with Inanna’s brilliant editor, Luciana Ricciultelli, I started to get cold feet. I thought: who the hell will want to read a book full of astrology and physics and telepathy and talking dogs? I was afraid the esoteric elements would put people off. Through this phase of insecurity, I kept thinking about Elizabeth, who is a wonderful writer and an extraordinary editor, and who also has an interest in metaphysics. I got up the gumption to ask Elizabeth if she would read the manuscript, which she did, returning it with thoughtful notes and questions that got me excited about the editing process again, and got me back to work on the book.

You are one of this country’s pioneering slam poets. How did you find the shift from writing and performing spoken word to writing a novel? What were some of the challenges and joys?

Spoken word is like a sprint, and writing a novel is a marathon, so the first challenge I had in switching from one genre to another was one of pacing. With poetry and spoken word, sometimes – if you’re really plugged in – you can finish a piece in an evening. There’s a lot of immediate gratification that comes from that quick a pace. And the whole matter of performing… with spoken word, you have the blessing of being able to get fast feedback on a piece – sometimes within hours of putting down the pen. For me, fiction requires more faith – and much more patience. It’s also got me thinking much more about process. There were long stretches of time during the writing of Over Our Heads, when I wasn’t writing at all. At the time I laid a big trip on myself about it. But later, I realized that taking that time off was part of the process. I needed to let things simmer a bit before I was ready to take the work further.

What’s next for you? Are you working on a new project?

I’ve really been digging visual art of late. I spent some time with Ilene Sova and women artists from around the world who had gathered for a two-week residency as a part of the annual Feminist Art Conference, and was deeply affected by the work they cooked up. That was in early May, and it seems to have started a trend… After that, I met a lovely artist in Edmonton named Ray Beau who does these powerful, provocative collages. Then I came home, and fell in love with a painting of High Park, by poet and mystic Clara Blackwood. And I recently did a reading at the Secret Handshake gallery in Kensington market. For some reason I keep running into visual artists who help me to see the world differently. I love that. People with a strong visual sense always keep me from getting too stuck in my head. They’re like my seeing-eye friends. They help me appreciate the beauty inherent in everything.

Check out the trailer for Over Our Heads: