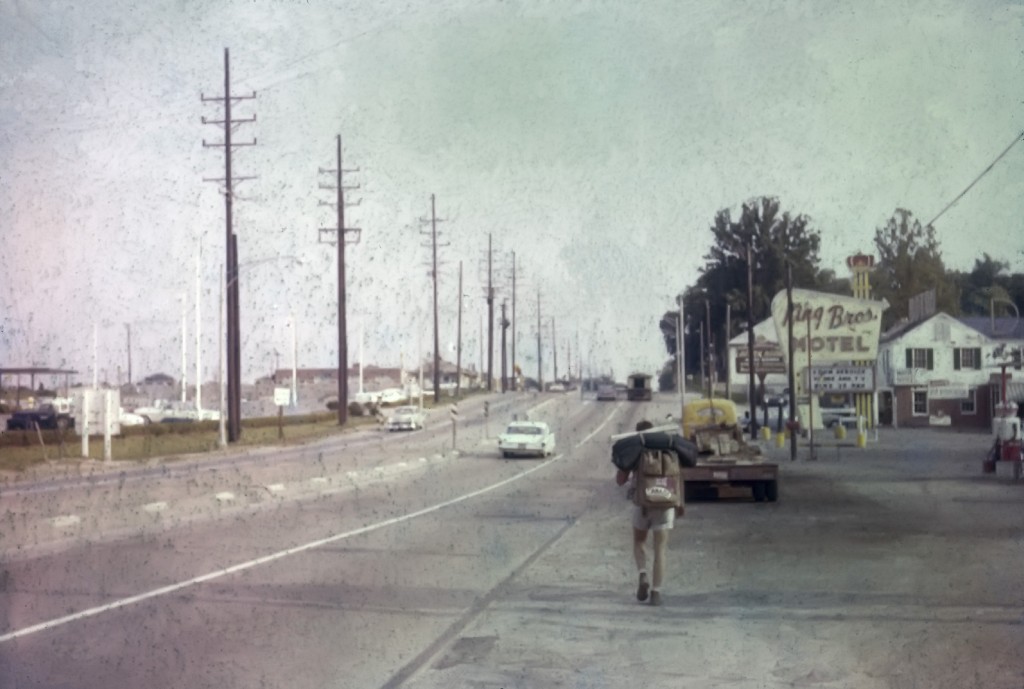 Ulrich hitch-hiking the St. Louis Bypass highway in the U.S. in July 1959 – Photo by Gary Birchall

This past Tuesday, December 16, my step-father left a pot of tea steeping on his desk and went for a walk in the woods. He did not return. Out on the rocky path, under the white pines, he died of a sudden heart attack.

Nobody ever thought this would happen. I mean, who does? But, also, Ulrich was hardy and fit, full of vigour, always out raking the leaves in his green overalls or kayaking across the lake or cross-country skiing at Hardwood Hills. It was incomprehensible that his heart was wearing out.

But it was, and it failed him, and now he’s gone.

Nineteen years ago, in September, I met him in Vancouver. He was my mother’s new boyfriend and he had come out west on business. He took me out to a sushi restaurant and slipped a hundred dollar bill into my hand before we parted. He bought me a book of Pablo Neruda’s poetry and scrawled in it: to my newly-found daughter.

They had only been together for two months. At the time this seemed presumptious, a bit startling, but now I treasure that book, beaten and soiled from my road-trip to Mexico that fall and many, many moves. Before J. and I  left The Pas in a mad rush to get home after the call came, after my sister told me in a trembling voice, Ulrich died, I grabbed it from the antique bookshelf that holds my most precious books and carried it with me.

I don’t really have many words right now. For five days, I’ve been at the new house of Mom and Ulrich’s, answering his email, sifting through his photographs, stumbling across the things that define him, grieving, cancelling bank accounts, helping my sorrowful mom.

Ulrich was a complicated man. He was a geologist, used to tromping the bush, staking claims, studying core samples; a lover of gemstones, as well as fine art and music and literature and travel, he was deeply concerned about climate change. He played the flute and reached out to artists he believed in and supported my own writing so strongly, my mom’s painting, his new family.

Every time I spoke with him on the phone, or saw him after a time, he’d ask, “Are you writing?” I will carry that question, in his voice, always in my head. 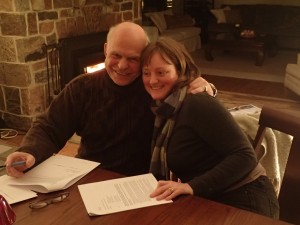 Over the past little while he had been working incredibly hard to complete his own book about lode gold, described as a treatise on the “discovery of a paradigm shifting geological process.”

“This book records a journey of trying to understand the metallogeny (ie genesis in time and space) of lode gold deposits,” he wrote on his blog. “For me this began in 1982 when I saw excellent sea-shore exposures in SE Nova Scotia, where ubiquitous quartz outcrops that is characteristic of Meguma turbidite-hosted gold deposits.”

Greek to me, but I’m told that this work of his has come from so many years seeing the same thing in the features of the rock. Most of all, my mother says, he wanted to remind his fellow geologists of the necessity of getting away from computer modelling and back to the observation and study of the physical earth. Back to walking the ground, he used to say.

There is much to do, and, oh, yeah, Christmas, and more tears and laughter and love to come, in the middle of my now-smaller family. We are planning a big party for Ulrich, a celebration of his life, for friends and family to take place in early July (a save-the-date will be sent out in January).

And then there is the grief, the sudden shock of loss, the strange adjusting to the alternate reality of a world without a person who you loved. We tell ourselves that the way he went is better than years of cancer, than a slow, long diminishing, which he, with his strong German spirit, would not have dealt well with.

If there is any consolation it is this, and the fact that I think, in a way, he died as he lived, and I am grateful for that.

As a seventeen-year-old kid, in 1959, he hitch-hiked 13,000 miles to California and back with his friend Gary, and that was the kind of guy he remained, the kind of man I knew him as: an adventurer, a person who saw the world as a place veined with glistening beauty and reached for it, no matter the risk.

So, in the end, with his hands swinging walking poles, out on a hike behind their house, his heart simply snapped. Mid-stride, he fell backwards onto the earth, beneath the trees, beneath the big sky.