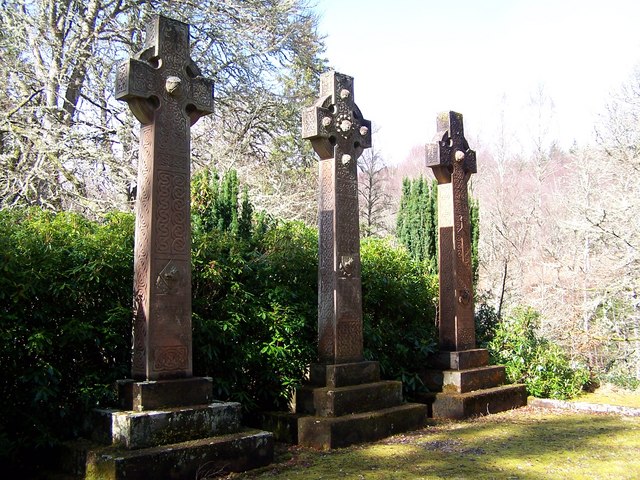 The Chisholm Graveyard – Photo by Stuart

I’ve been printing maps lately. Screen grabs of the UK’s ordinance survey to help chart our way around Struy, near Inverness, site of the Clan Chisholm’s burial ground.

Originally, we’d planned to visit this area and then find our way to Loch Ness and start our hike at the marked trailhead. Then, our plans changed and we realized we had to begin with a visit to these “hot-spots”: the burial ground, the clan castle, and the Cnoc Hotel which once housed the clan’s Estate Office (and now features a watering hole called ‘the Chisholm Bar’). These lands stretched throughout the whole of the Glen Affric, which we’ll be hiking.

Perfectly practical reasons made us alter our plans. Our desire to see the Culloden Battlefield, do a boat tour on Loch Ness, visit Cawdor Castle and take a day-trip to Tain, where my great-great-great-great grandmother (a Munro) was born meant, quite simply, that we had to do it this way.

So, imagine the shivers that shot up my spine when I read this, in Heather Menzies’s Reclaiming the Commons for the Common Good, a book partly about her own return to her ancestors’  territory in Scotland:

Knowing the habitat through the dailiness of inhabiting it was important. So was the sense that the spirits of the ancestors inhabited it with you, living on at the site where there bodies were laid to rest. This is why ancestors’ graves often marked boundaries, and anyone making claim to land as their ancestral home was expected to enter the land at this spot, with the idea that the spirits would recognize them and welcome them back, or not.

This, of course, makes me wonder what I’ll feel when we get there, when I set foot amongst those graves. I’ve never been ‘back’, if I can even say that, because it’s been a long time since my people left…

My great-great-great-great-great grandparents were part of the first wave of the clearances, leaving with their children in 1773, a few decades before William, the twenty-fourth clan chief, seeing money to be made with Cheviot sheep, started actions in 1801 that would ultimately evict over 10,000 of his clans-people.

In 1746, the clan had fought and lost at the Battle of Culloden and they’d seen the British Act of Proscription come into play which banned the tartan, the teaching of Gaelic, the playing of bagpipes and the rights of Highlanders to gather.

So they sailed on a ship called the Pearl, landing in New York State, before their loyalty to the Crown sent them north to establish Glengarry, Ontario (then Upper Canada). From there came Donald, John Wilson, Walter Wilson, Herman Walter, then my mom and my uncle – and then me.

I’m glad we’ll be giving time to ‘daily inhabit’ this ground, as Heather says. We’ll be walking for a week, maybe more. Sleeping on the ground. Drinking the rain and from the river. Giving the spirits time to speak.

The spirits speaking (and let’s hope they do!) means probable silence from me – so, unless I can’t hold my tongue and make it to a computer, I’ll be back in late July/early August. See you then!