End of the Line: the Detroit Train Station 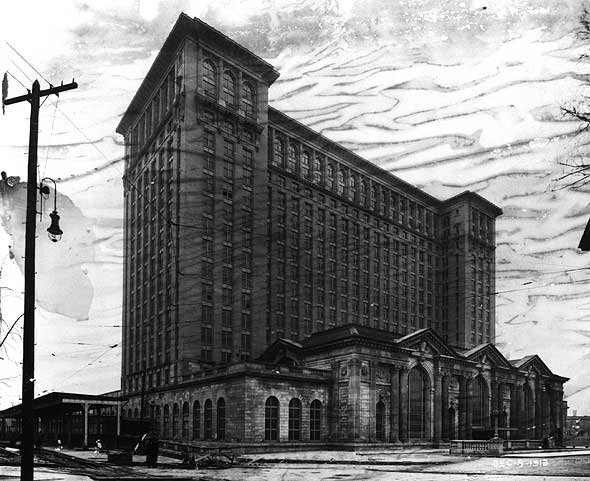 The Michigan Central Train Station, back in the day

During dinner with friends on Sunday night, we ended up, a few bottles in, hovering over my friend J.’s laptop, perusing pictures of the unbelievable abandoned buildings in Detroit. Specifically, the train station.

J. grew up in Windsor, so she often tells stories about being across the border, cruising through streets shadowed by empty buildings, unknown eyes gazing through broken windows. It sounds scary to me, and entirely unreal, like a living, breathing version of a Mad Max movie.

But the train station stuck in my head. Opened in 1913, this once beautiful Beaux-Arts Classical building was glorious and busy with people dressed in jaunty hats and dapper suits, hustling across the shiny floor to answer their business in the booming auto town that was Detroit.

And how very strange that last night, during my treat to the husband of a final summer double feature at the drive-in, that this very same train station came to life, complete with dust and darkness, near the end of Transformers.

You know that broken down building with the astonishing pillars and huge arched windows that Sam or Tim or whatever-his-name-was sped through to hand off the cube to the army helicopters (although what they were going to do with it, I never was sure) – that was the Michigan Central Train Station.

Seems a shame that as this once-lovely city tries to reinvent itself by building new casinos complete with luxury hotels, the past is left to simply crumble, used only for fluffy action movies that evaporate as soon as they’re seen. Times sure have changed.