Back in April, I stopped myself from writing a blog post about Duke, the incredible, adorable Lab mix from Cross Lake we were fostering through The Paw Local Dog Rescue. That was mostly because I knew what I’d say: something along the lines of “please, please, please can I keep him?!”

Although he obviously needed to be trained in a bit more independence, this guy would crawl in your lap for loving, seemingly unaware that he weighed nearly 80 pounds.

He would get out of his dog bed in the middle of the night to retrieve (down the hall, through the kitchen, to the front door and back to our room) one of our shoes to sleep with. When Griffy curled up on his bed, instead of threatening to squash her or nosing her off, he’d gently squeeze himself in beside her. She grew to really like him, when she pretty much just tolerates Mowat. 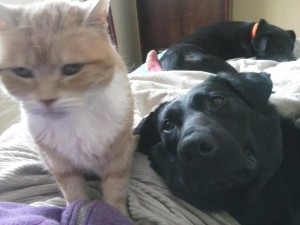 Griffy and Duke (with Mowat)

The guy had a huge scar on his side from having hot oil tossed at him. Still, he adored people.

It got to the point where I was saying things to J. like: “how are we going to handle having two dogs when we go on vacation?” and J. would look at me like I’d grown another nose. He loved him too, but deep down he knew we were only a one-dog family.

It seems Mowat did as well.

To make sure we stopped bringing home the needy foster dogs, he partially tore both his cranial cruciate ligaments while Duke was with us. And then, once Duke went to his new foster (and now “furever”) home in Flin Flon, the left one completely ruptured.

All you dog people out there are probably groaning. But for those of you not in the know (like me, when this whole saga began), this kind is injury is like a human being rupturing their ACL. In other words: the thing that holds your knee in place is no longer holding your knee in place.

Last week, we took the boy to Saskatoon for surgery. Since we don’t have kids, we aren’t really worried about impending university costs. This is good, as we basically paid a year’s tuition for Mowat’s operation – or, rather, the credit card did.

Yesterday we finished the first week of his healing and rehab. My sister-in-law is a naturopath and she advised giving him homeopathic arnica in his water before and after his surgery and I’m not sure if that’s what did it, but the rate of his healing has been incredible.

The dark purple bruising that covered his shaved leg was basically gone by day three and the swelling lasted for only a day. The sutured incision has closed neatly, without an iota of infection.

I’m especially relieved about that last part, as the surgical intern filled me with dread when he emphasized how any infection could get into the bone (the surgery involves a bone cut and plating to keep it together until it “builds a bridge”), creating basically a pain-and-financial nightmare of antibiotic IVs and more.

This summer, Mowat’s second (in his life, I mean), we’ll be spending lots of quality time with him. His healing requires twice-daily rehab sessions which he sometimes likes and sometimes… doesn’t. 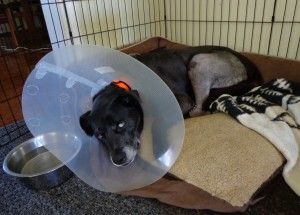 I’ve resuscitated the Reiki training taken in my former life when I was convinced I was an alien-channeling healer (ie. living on a sort-of commune in B.C.) and, if nothing else, he loves it.

That, and the all-over body stroking to relax him before we work the joint and stretch the limb, are his favourite parts. Ice? Not so much.

What amazes me most about dogs these days is how accepting they are of their circumstances.

Mowat spent a good month before he could get into surgery hobbling around on one broken, one partially broken, knee, still pulling to go see the river. If we could have asked him if he wanted to go to the doctor to get his knee fixed he might have said, “What do you mean? I’m fine. It is what it is.”

They are like little Buddhas, these dogs, or at least Mowat and Duke have displayed such traits. They accept their fate – for better (being rescued) or for worse (being burned with hot oil). They take what’s in front of them and build their lives around that. I have to wear this cone of shame, all right, I guess I’ll just go to sleep.