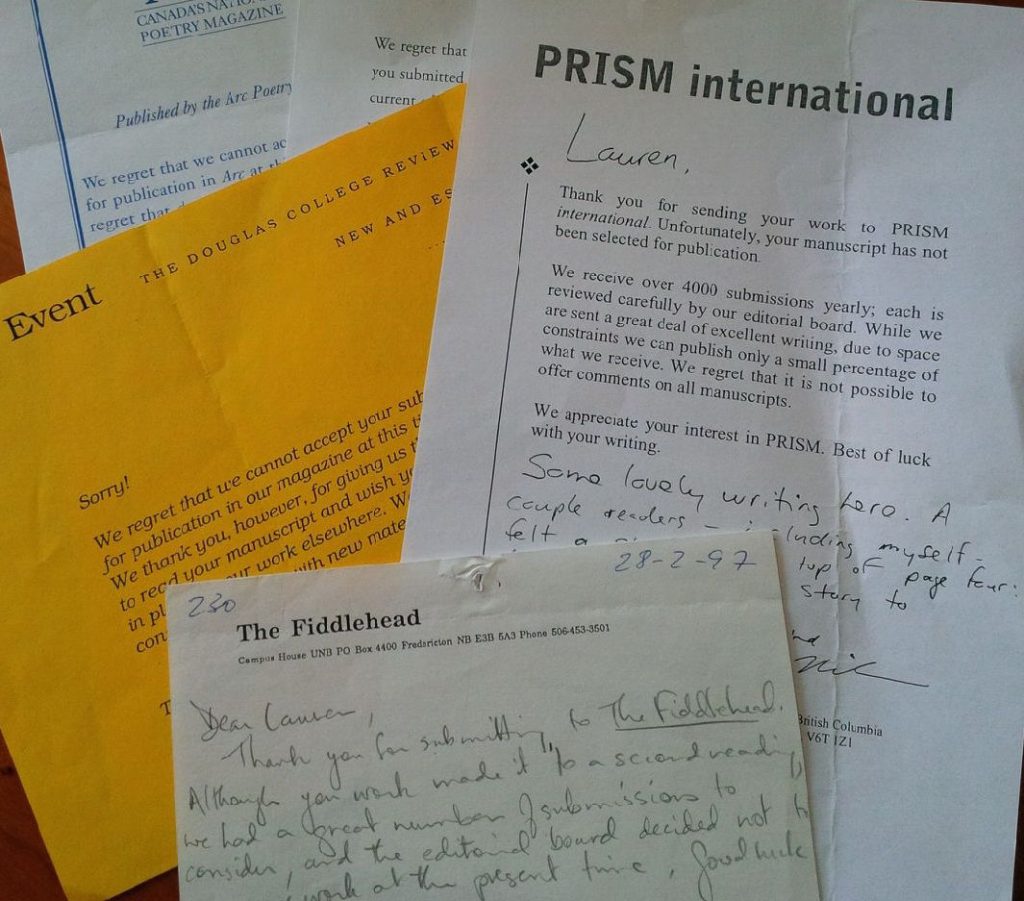 Part of my rejection letter collection

On the orange wall of my office, in black marker, I’ve scrawled the words: Don’t be careful!

I got this idea from Sarah Selecky and when I first wrote it, I believed it to be about the writing, an instruction I could glance at, reminding me to go deeper, to not let that internal ever-cautious voice tell me what I can and can’t say.

It’s about that, sure, but I think it’s also about other things.

Things like: claiming my artistic life, being brave, being willing to fail.

I’ve had a few failures this week.

I didn’t get accepted to a conference I wanted to teach at. I got some gut-punching notes about my new novel. I didn’t receive the unconditional praise I (naturally) desired for another manuscript I’d submitted for generous critique (not truly a failure, that one, more a useful and necessary reality).

And I’ve been struggling a bit. Not to get over it; not to toughen my skin. But, instead, to feel it.

I had a coaching session a few weeks ago, with one of the women in the creativity coaching class I’m taking. We take turns coaching each other over Skype, this time with the video turned off because I wanted to be able to just talk.

I opted to discuss my poetry collection, the one I’ve been working on for six or seven years now, the one that’s been rejected three times (always with fantastic editorial notes), the one that was long-listed for the CBC poetry prize, that’s been published in snippets, the one I’m striving to master.

I talked about the rejection, about my intentions to re-edit the manuscript, about the next publisher I’ll be submitting it to. That’s very practical, she said, and then she asked me how I feel in my heart about the work. I felt something cave, just a little. A dent in the armour. I love it, I told her.

I’ve been working this job a long time.

Before I turned twenty, I was sending out packets of poems with the requisite self-addressed-stamped envelopes. I got rejection letter after rejection letter, often with notes giving feedback, sometimes asking me to resubmit, and then, once out of every ten times or so, I’d receive an acceptance. I learned how to steel myself, how to open the envelope, read the I’m sorry but… and harden to it, tweak and polish the story or poems, send the packet out again.

Tenacity, I tell people who want to be writers. You have to have a tough skin.

Now I’m wondering if those two things must always go together. I’m wondering if being so careful with my emotions, if not really feeling the blows, has actually done a disservice to me, to my work. If, in the struggle to publish, I’ve cut myself off from what I feel for the thing, from my ability to see it as a creature that needs a loving home instead of a plastic-wrapped product looking for a shelf.

You sound like the publisher has all the power, my coach said, during that session. But can you love it and move forward believing that you’ll find someone who loves it too?

This is tougher than shutting off, this vulnerability. But where else but within vulnerability can we create? Who am I kidding when I don my business suit and stuff gut-wrenching poems into my briefcase to try to sell them?

This morning, I grabbed my poetry manuscript and felt sick to my stomach. Too soon, I thought. Too soon to shuffle back to my desk, to keep working, keep marching. Instead, I went online and shuffled around in the clutter (search term: creative failures) and that’s how I found Sarah Lewis, an art historian and writer who’s written a book called The Rise: Creativity, the Gift of Failure, and the Search for Mastery. She says:

The pursuit of mastery is an ever-onward almost. ‘Lord, grant that I desire more than I can accomplish,’ Michelango implored… Mastery is in the reaching, not the arriving. It’s in constantly wanting to close that gap between where you are and where you want to be. Mastery is in sacrificing for your craft and not for the sake of crafting your career.

Watching this video, the tears came. Not a barrage, but enough. Don’t be careful, mutters my wall, so I wasn’t. I let it happen, and I felt it, the disappointment, the grief of the recent (as she calls them) ‘near wins’, and the exhaustion, too, the result of this tough career.

It won’t last, I know that. I know that because the real pleasure, possibly the only pleasure, of the artistic life is in the doing and the doing, I must do. And could it be that that’s the truest success? As Lewis says: “Mastery is not a commitment to a goal, but to a constant pursuit.”