Last year, I worked for awhile with a guy who grew up in The Pas.

It was taking me awhile, I confessed, to get accustomed to the understanding that all around this town is forest. Miles and miles and miles of it. I mean, try to walk out of here, especially in deep winter, and you probably won’t make it.

This feeling has come over me every autumn around this time for the few years we’ve lived here. Well, usually earlier. Usually in late October. A year ago the thermometers were already dropping down into the minus 20s by now.

Last weekend, J. and I went for a hike, and when we couldn’t find the trail to the lake from the back road we were on, and the two dogs with us were useless (I think it’s only in the movies that lost, domesticated dogs can sniff their way to safety), I started really feeling the cold seeping out of the ground. It’s not like we were at any risk (we were on a road, for pity’s sake, although a remote dirt road, many miles from any houses), but, you know, I think this way. It’s the writer in me.

What would happen if…

I thought that way last night, too, when our power flickered and went off at around seven p.m.

The reason. Well, this: 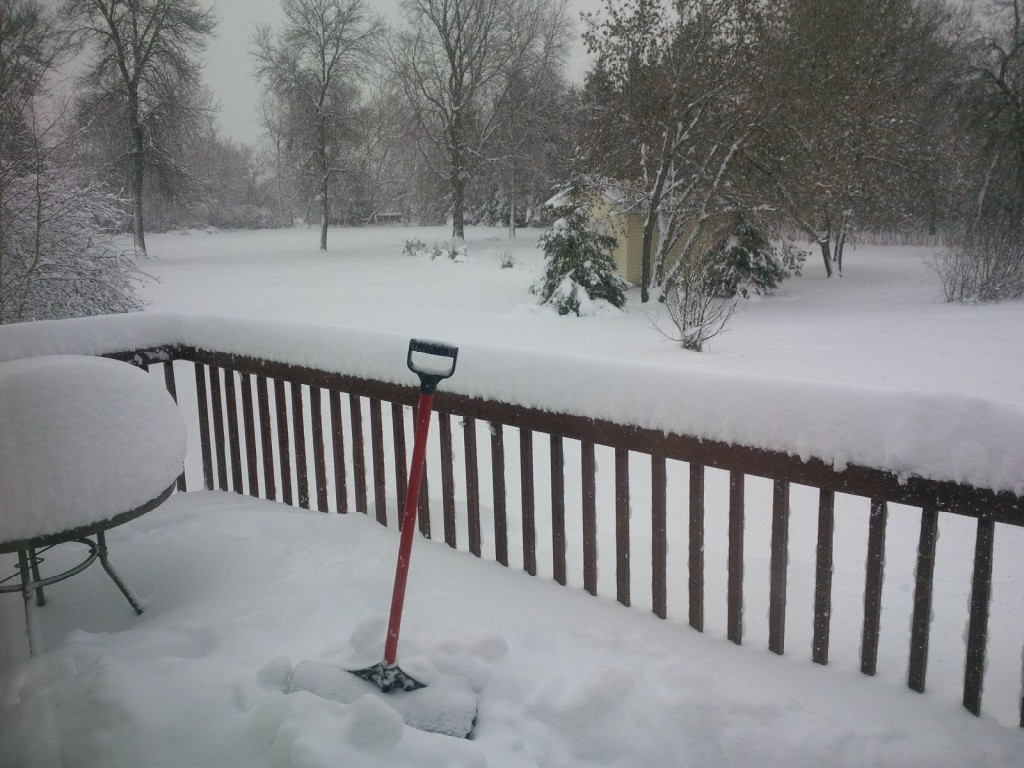 All our snow arrived in one day…

Lucky for us, we’d brought some firewood in just a few days earlier, so we could fill up our wood furnace and stay toasty. J. lit our camping lantern and we played Scrabble (he won, but barely) and then we went to bed and in the night the power came back on.

Sounds dreamy, doesn’t it? It was; it was nice. There was even enough light for me to knit by when it wasn’t my turn, but still that little niggling fear remains.

That guy I worked with grew up with it. I don’t know how many times he talked in foreboding tones about the Saskatchewan River, how fast it is, how when he was a kid a lot of people drowned.

Last weekend, we did find the trail, and before we broke through the trees, we heard this beautiful sound.

I thought it was birds, a mysterious flock of them, but it turns out it was the new ice that had formed overnight, breaking up in the sun, clattering against the rocky shore. I took a video, so you can see for yourself:

There is so much beauty up here in the far north, but it’s got an edge, and anyone who’s lived here long enough knows it. Respect it, admire it, but be careful because it can bite.