I’m working on the plot of my next book these days and in the process thinking a lot about cause and effect. 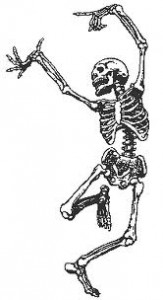 It seems strange but for a long time I didn’t get this. Not until I spent the summers of 2009 and 2010 in what I like to call Build-A-Plot Boot Camp with the inimitable Susan Swan.

I remember my first meeting with her. In the wild back garden of her house in Toronto, she pulled out a huge piece of paper and asked me what I thought would happen in my book.

Happen. How should I know?

That was my inside thought. What I said instead or, rather, mumbled, was a description of the spattering of events that at that time were tangled illegibly in my head. She wrote them down, in between tossing bread crumbs to the birds.

But this isn’t to say that the writing gets down that way, in time sequence, as she mentions in her description of this technique on her blog.

And of course we know that every writer works differently and some do as I have done in the past (and still often do with short stories) which is to simply start writing. See who shows up. Find out where they are. Figure out what they’re thinking.

Then revise the hell out of it in order to figure out what actually happens.

This method got me a skeleton draft of both the island and the city sections of Swarm (which I wrote separately and then wove together), but much of that early draft was altered and chucked when I sat down and gave dedicated thought to the grief that might actually cause the queen to die. I plotted; I plotted again; I plotted again.

I love a good thriller. I adore Patricia Highsmith and the early films of M. Night Shyamalan with those fantastic final plot twists. Things happening, drama being built. The pleasure of a non-put-downable book. Suspense; the linkage of cause and effect.

Getting there takes hard work in architecture and drafting, while at the same time remembering the flesh and bone and blood of the thing. I found the process of building that sturdy skeleton the most challenging and ultimately incredibly rewarding even if it came after I laid down the skin. And Swarm would not be the book it is if I’d done it any other way.

But in my current work, I’m trying something new. This time, I’m starting with the bones. It can’t be without flexibility, I realize, because every physical form has to be able to twist.