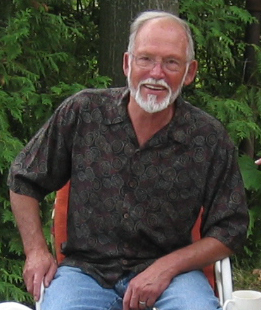 My uncle died on Saturday. At the end of a ceremony with my aunt, he lifted his arm to embrace her, relaxed and slipped into peace.

It was expected, it was a good death, but that doesn’t make it less difficult for those left behind.

I was not prepared for the memories that came flooding back, the realization that emerges over and over again that he is gone. That his body, bounding through that door with his grin and wit and energy, is empty now. That he’ll never return to the Island, armed with some hot sauce he wants us to try. The stroke he had two years ago took much of that away, but now he’s really disappeared.

On Saturday night, we gathered – minus my stepdad, up north, and my brother, who jumped on a plane to try to get out to Oregon in time to say goodbye, but missed him. My cousin, when she picked him up at the airport, told him how sorry she was. People don’t die on our time, he said.

On the back porch, overlooking the choppy water of the lake, we lifted bottles of Sleemans and Mill Street Stock Ale in his memory. My mom read aloud the last chapter of William Least Heat-Moon’s PrairyErth, an account of a walk they took together through the wide open lands of Kansas. When I’m an old prune of a man on my deathbed, he told Heat-Moon, I’ll remember the longest walk I ever took, because it was the time I connected the most. We cried. We cried so hard.

I like to think that my uncle, dubbed the Venerable Tashmoo by Heat-Moon, is rambling now, traipsing effortlessly through some amazing landscape with a history he knows inside and out. Postulating, pontificating, he has an audience of admirers and the company of those he loved and lost long ago: his father, his mother, his son.

I like to think this but I don’t really believe it’s true.

What I do know is that I feel him with me. Yesterday, as I brutally scrubbed the bathtub to escape from grief, I almost heard – in light of the fact that I’m not much of a housekeeper – the joke he would have made. Geez, people should die more often, he’d say. I laughed outloud. And I felt how much I love him, again, as I always will.

For those who knew my uncle, a funeral service will be held in Utah on June 30th and a memorial, probably next year, will be held on Manitoulin Island.

Donations in Clive’s name can be sent to:

A charitable donation receipt will be issued.