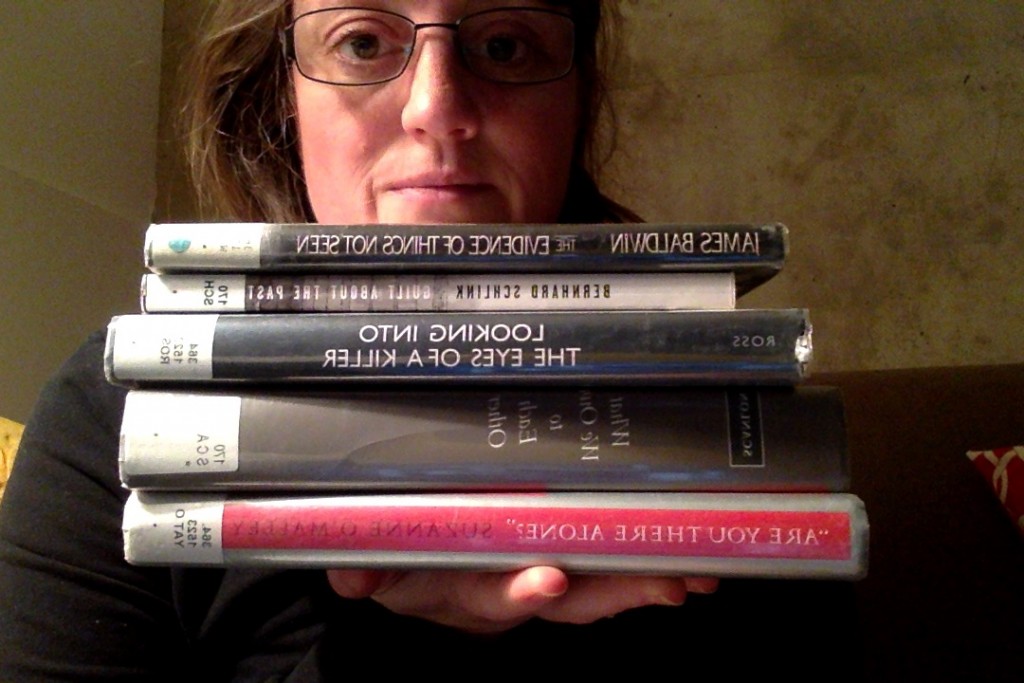 Me, with library books for novel research.

This morning, I started writing my blog post and it turned into a three-page long addition to a scene in my novel.

That’s the way it works, lately: sometimes I’ll get a snippet, two sentences, a little bit of dialogue, to be added to the writing that’s already done. Ah, I’ll think, walking along the river, or headed to the nearby library, that’s what he needs to say. Notebook out.

Having said that, though, I’m in that place, nearing the completion of the second draft, where I occasionally have the desire to trash most of it and, simply, start again. This is because only now am I starting to figure out what the thing is about, who these people are, what they want to say, what I want to say through them.

It’s a tricky place, because you don’t want to wreck the good stuff you have, that writing that pushes into questions and therefore, is really alive, but then you also want to – ahem – look like you know what you’re doing (without infusing the work with pretension, with contrivance, of course).

As you can probably tell, I’ve been diving down deep into the work. 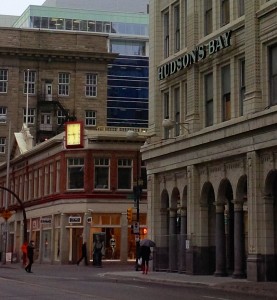 Downtown Calgary in the rain. This looked so Mad Men to me…

Living my days in a cement-walled bachelor pad with kitchen, bathroom, murphy bed, couch, and desk, overlooking an art gallery/artist gathering space, when I’m not out walking the river path to Inglewood or west, into Chinatown, and downtown (or, you know, getting pad thai, pho, gluten-free pizza, and the like).

It’s enjoyable, this process (writing, not eating, well, writing AND eating), although the other day I was remembering how, while I was on draft six or nine or fourteen of Swarm, I once Googled “what to do when you hate the novel you’re writing.” There are those days, as well, when the well is dry, when your writer-self is saying to your whip-wielding self, Chill, dude.

I need to get better at listening to the latter.

On Monday, I listened to a podcast interview with Henry Winkler (you know, the Fonz) on a show called WTF that J. turned me onto. He said that, for him, the two things he’s needed most in his acting career have been tenacity and gratitude.

The first: Yeah, absolutely! This is my word, it’s what I say to anyone who asks me for writing advice (because you know that expression: sometimes it takes ten years to become an overnight success, or twenty-five).

You need gratitude in order to dispel the anger and frustration at living the hard, competitive creative life, said Winkler. Yes, I thought. I needed that.

So, in that spirit, here are the best things about the past little while, the most helpful things for my creative work and my self in my current, two-month stint as a Calgary-dweller:

And, now, to head to a cafe to work, write, people-watch, and sip a fine cup of coffee – some of the best things of the city.

If you’re in the Calgary area, and you want to come out and say hello (or you have friends/family in the area who love books), I’ve added a few upcoming events to my events page. Hope to see you!