I can tell when the writers I’m coaching are starting to catch fire.

It’s when they write to me, bubbling over with the work they’re doing, whether that’s revising or writing hundreds of words a day when before they were sluggish, not wanting to start. There’s an energy in their emails that wasn’t there in the beginning and I feel chills rush through me. It makes me so happy.

It makes me think of my very favourite quote, the one I draw on again and again, and that’s this: 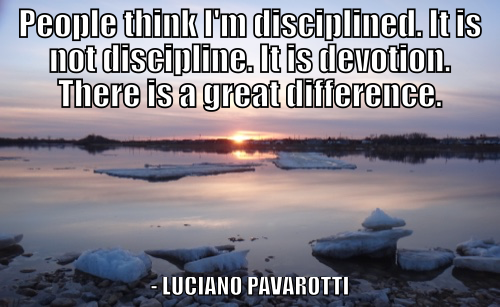 I’ve been thinking about devotion and discipline in my own life lately, and what it means for my own work.

I haven’t been to the gym in a couple weeks, and someone said to me the other day (about writing): perhaps you’re too tired, perhaps you need a break, perhaps you put too much pressure on yourself. And I thought: break!?

Back when we were roommates, my dear friend, P., once commented on what she called my “raging career”.

That was when I was in my twenties, hammering out my very first novel (which I abandoned for reasons similar to ones that now come up when I’m coaching). Even though I wrote the first draft by doing ten-minute timed-writings a day, by the time I got to revising, I was deeply entranced, fully devoted, and spent hours every day on it.

And there’s nothing wrong with that. It’s wonderful, but what happens when the devotion isn’t there? Should I lean entirely on discipline, whipping myself at my desk?

I know that I’m a bit of a workaholic.

When I’m not working – on something – I feel lazy; I say nasty things to myself.

This habit has gotten me places (even these days, instead of writing, I’m working on a new online project, which I’m really excited about, which will be offered in advance to my post subscribers before it launches), but when I say –aholic, I mean it. Working constantly quiets those accusatory voices; I don’t really know how to rest.

I come by this honestly. My grandmother, the eldest girl, helped raised her six siblings starting at age ten when her mother died. My great-great-great-great-great grandparents were dirt-poor Scottish crofters who sailed to New York State as indentured servants. By now, it’s in my DNA.

Daydream, my mentor Susan Swan advised me when I was writing Swarm.

And it was when I was lounging in a hammock on a forested island campsite in northern Manitoba that the twist ending of my new novel came to me.

I know how important this is. Essential, actually, in order to let your brain spit up understandings that only exist in the mind’s deep corners, those connections that won’t necessarily come when you drag yourself to your desk as your soul is screaming for slumber.

Says Pat Schneider (in Writing Alone and With Others): “The secret to disciplined writing life, in my opinion, is primarily a matter of respect for your own deepest instincts, habits, and personality. Go to your writing simply because you love to write. Know your own habits, and let them work to assist you.”

But I’m also starting to see that, yes, this might be exactly what I need.

To act on what my instincts are saying.

To take a break. To enjoy summer. To set aside (for now) my (two) novels, my poetry collection.

To turn instead to our upcoming trip to Scotland so that I can be fully present on the journey into that part of my origin story.

To plant some seeds, re-discover devotion, return home having caught fire myself.