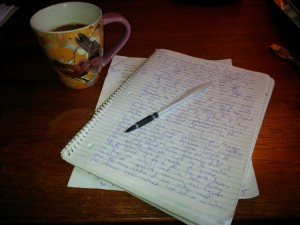 I set a personal goal for myself this week and so far I’ve been hitting it.

The goal: three hours of work per day on rewriting chapters.

I use the timer on my phone, and I go hour by hour, and I stop the clock when I take breaks so that I know I’m not counting as work the time I wait for my tea to warm up or make a new pot. Not that I’m not ‘at work’ during these moments, because I am, because my head is still occupied with the story as I’m standing in the kitchen with the kettle on to boil. Which means, I guess, that I’ve actually been doing more than three hours a day, and that feels great.

I decided to aim for this because last week I was lazy.

Granted, I’ve been exhausted. As I said, this first half of the year has been nutty. The other morning I woke up and didn’t know where I was. In my semi-conscious dream-state I thought I was in my old house in Orillia, likely an after-effect of having lived in three time zones, three provinces throughout the first half of 2015.

When I got home from Calgary, I gave myself permission to be tired, to go slow, as we all sometimes need. But after a week or so, I found myself justifying my habits and thinking about that part in Fearless Creating that talks about how we need to allow ourselves to simply, clearly say no to the writing some days, without guilt.

I thought of this. I did feel guilt. I felt anxious. I felt, deep down, like my internal wise self had a look on her face, the kind of look my mother, who’s an artist, gives me when I wear a colour that doesn’t suit my complexion. Like, you know better than that.

Truth is, I didn’t need any more time. Saying no was no longer about needing rest and a few good books to read and maybe an artist’s date. It was about avoidance.

Screw that, I thought.

So I’ve knuckled down and dug in.

And what I love about this, about drilling into the work, especially on a novel, that long, sustained story, is how you start to occupy two realms at once.

There’s the world of the book, ever present, always alive, ticking along in the back of your mind.

The waves are coming in on the beach. The gulls are calling. Your characters are hanging out in the green room of your brain waiting for their cues, whispering to you and to each other.

Ideas rise up. Connections get made. It’s magic. And it’s a kind of training. Runners must know this: how your body grows to know that long rhythm and eases into it, trusts it.

I’ve said a few times over the past couple months that it’s okay to write in tiny sprints if that’s the only way you can get into it. Ten minutes a day, if that’s all you can do. And while I still believe that’s true, I also think that there’s great value in pushing into these long stretches, even when it’s hard, even when you feel like you’re totally lost.

For one, the more time we spend in a place the better we know it. The longer we’re with people, the clearer they become. I remember feeling like it wasn’t until the last rewrite of Swarm that I felt like I really knew Sandy. By then, I’d spent four years with her.

Immersion also allows your mind to make connections that never get made in the ricochet between every day life with all its noise and pressures and working creatively. A story only really begins to release all its corners and show you its truths when you’ve settled into it.

You have to trust it, and that takes time, that takes settling in, that takes throwing the timer on and letting yourself be there, building the spell, really living within your made-up world.