Create a character, I said last night, during a class I’m teaching called Write Your Heart Out! (from Joyce Carol Oates’s advice to writers).

A picture of feet was up on the screen. Red converse sneakers, legs in jeans, gender-neutral.

Paint what you can’t see. Follow the pen into backstory, emotions, relationships or simply a description of facial features, hair colour, the particular shade of eyes. Use details that appeal to the senses.

What rolled out of our pens was unexpected, as it always is.

And when we read what we’d written, we all had people: tender, struggling, inhaling the first few breaths of creation.

My own nib scrawled out a description of one of my current novel’s secondary characters and all of a sudden, there he was, covered in a rash of freckles (who knew?)

You wrote all that in 10 minutes? one of my students asked.

My brain is wired to let go and write, I explained, then shrugged. Do it enough and that happens.

I nodded, and told her about the mantras and breathing exercises I use when nerves come calling, usually during scenes when the stakes are high, when I doubt myself, when I’m writing on a day after rejection’s arrived.

Sometimes, at those times, I’ll do just 10 minutes.

When clients of mine are blocked, this is what I suggest (or five, if they’re really blocked). Some take to it immediately. It gives them a simple expectation they can meet and soon enough they realize how medicinal it is, a tonic like those tiny, sweet homeopathy beads that you think mustn’t work at all until they do.

Those few minutes, done regularly, remind them who they are, what’s meaningful, what they want.

It’s like opening the window in springtime, looking up at blue sky after miles and miles of stony trail, pushing down on the gas pedal.

For others, though, it isn’t so easy.

If they aren’t able to step inside the illusion of what it is to be a writer – anxiety-free, ever-confident, the words looping out of the pen, fingers clattering freely on the keyboard, best-seller lists, and fancy parties – they can’t do it.

Better to starve, I guess, than to eat the scraps in the cupboard: a can of beans, a few musty beets.

On the surface, this seems like simply an all-or-nothing mentality or maybe even just a desire that it be easier than it actually is.

But I know it’s more.

I know it’s deeper than that, because there’s real pain.

Why keep saying ‘all I’ve ever wanted to do is write’ and then not write?

It breaks my heart actually.

It reminds me of Pat Schneider’s advice in Writing Alone and With Others.: 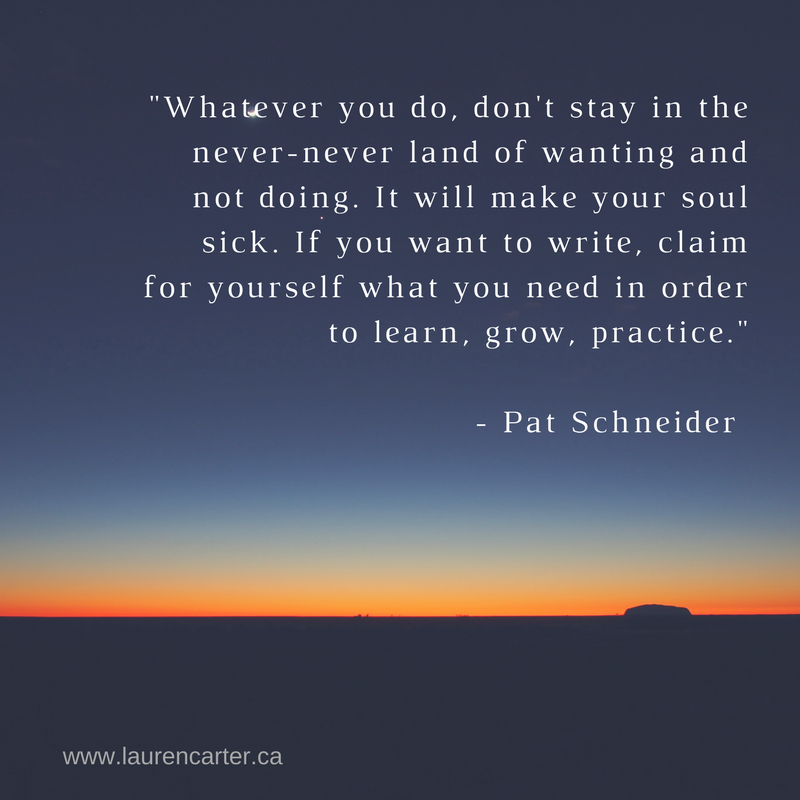 And I know how hard it is, but I also know that there’s a fundamental question to be asked: is it better to sustain a hungry regret or to feast on an imperfect meal?

The answer, of course, is easy: it isn’t better, the half-living, the slow starvation, trying to avoid looking at that dream of what could have been: the life of a writer who doesn’t exist (trust me, she/he/they doesn’t exist – we never get to be the writer we dreamed we’d become).

Sitting, like we did last night, pens in hand in a high-school classroom, letting go of our minds, tasting the last, dim sweetness of the soft, old beets, spreading their crimson colour.

My fingers are still stained.

Try this: Go to the heart of it. Write about not writing. Get out a pen and notebook (because on a computer it’s too easy to edit and get caught in tangles of self-judgement and accusation). Take a few deep breaths, put on a timer for five minutes, and start with “I don’t write because…” Nothing happens? Sit out the minutes. Try again tomorrow. Teach your body and your mind that this is your intention.