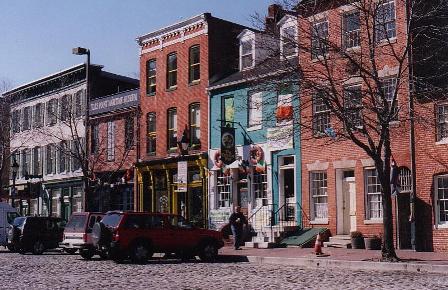 A few years ago, my brother was living in Baltimore, Maryland and J. and I took the opportunity to visit. He lived in the suburbs, but showed us around the old downtown – the Inner Harbour (yes, here in Canada, we retain that old English ‘u’) and the city’s Little Italy. We learned that the Irish also had a strong presence in this city, fleeing the famine and ending up in Baltimore to work on the railroads in the mid-1800s, a history now commemorated by two museums and a walking tour through what are now some of Baltimore’s rougher areas.

But my favourite place was Fell’s Point. Tucked up against the ocean, this historic area is paved in cobblestones and still boasts an active, old market where crab soup is served with cornbread by an apron-clad waitress who calls you ‘Hon’.

The neighbourhood bars – the Cat’s Eye Pub and the Wharf Rat Tavern (the Fell’s Point location), among others – retain the dust and grime (and archaic charm) of a more rough-and-tumble time. In the Wharf Rat Tavern, we ordered the local drink, brewed by Baltimore’s Oliver Breweries. Surrounded by broad beams wrapped in thick ship’s ropes, we sipped stout alongside our meal of malt-vinegar-soaked orange roughy and succulent oysters accompanied by chips (uh, French fries).

After eating, we wandered around the corner to the Cat’s Eye, an Irish pub with nightly live music – or, as is the case today, a 2:00 pm start to Dogs Among the Bushes, a traditional Irish folk band.

On the way, we crossed Lancaster Street where William Fell started the first shipyard after arriving from England in 1730. As other shipyards opened, the harbour began to boom and the neighbourhood evolved into a crowded haunt for mariners and merchants, complete with rooming houses, plenty of pubs and the essential brothel.

Turns out the Cat’s Eye used to be the brothel. Serving spirits and ale for over a hundred years, the bar’s low ceiling and slanted floors once hosted a pretty rough crowd of sailors and, more recently, bikers. In the 1960s, Fell’s Point came close to being obliterated when the city nearly replaced the ancient rowhouses and cobblestones with an expressway. When Fell’s Point – or part of it – was added to the National Register of Historic Places, that plan thankfully came to a grinding halt.

In the bar, a cobwebbed model of a schooner hung from the ceiling and a large mural of the history of Ireland decorated one wall. Above the narrow stage, a wall light glowed red near the remnants of old-staircase, once used by sailors climbing to the brothel bedrooms, so legend and locals say.

Sipping scotch alongside a chaser of microbrew, we watched the band and felt thankful for the chance to enjoy the unpolished Fell’s Point, to sit at the worn bar and drink our grog like so many others who came before.