Last week, J. tells me, he and Mowat were out on the trail behind our house with a few other dogs and dog owners.

They were having a great time – the dogs, that is, the owners would have been hunched inside their down jackets, stamping their feet on the ground to stay warm. Then, Mowat did what Mowat does: he ran into the neighbours’ yard, and up onto their porch.

The other dogs, called back, thought (so J. said): Hark! I must hurry promptly to my master! Mowat, being Mowat, was already chowing down on ice tinted pink with fish blood from a hauled-home catch when J. got to him.

I must stop here and say, It isn’t that we haven’t tried. We had Mo flying back to us on a solid recall for awhile, until he decided he didn’t want to do that anymore. But the thing about winter in The Pas is there are fish everywhere.

We didn’t realize this when we moved there, when we got a dog. Or, perhaps a better way of putting it: we didn’t think it through.

When we first got to town, and when we first got Mowat, it was January. He was a stray, surviving on the cold streets, likely eating whatever he could find. Eager to drain our wild puppy’s energy, we’d take him out on the river across the road from our house and let him loose. Problem was: fish huts. Heaps of goodies at every door. Like a manic trick-or-treater, Mowat would race from one bright shack to the next while J. and I ran along behind him.

I guess it became a game to him: getting away from us, finding the chewy, frozen fish guts.

We also accidentally trained him to shove a ball under the couch and dig at it, thus tearing the liner to shreds, because we would reward his behaviour with our (you can imagine) adamant attention, our hands fishing under to retrieve the ball.

Here in Ontario, I’ve purchased a 25-foot long training leash to take home next week. I’m determined, if it’s possible now with such incredible snacks on the other end of a sprint directly away from us, to get our dog pointed in the right direction.

Even with a dog like Mo, who once ran into another neighbour’s yard and jumped in their pool, I think we can do it. 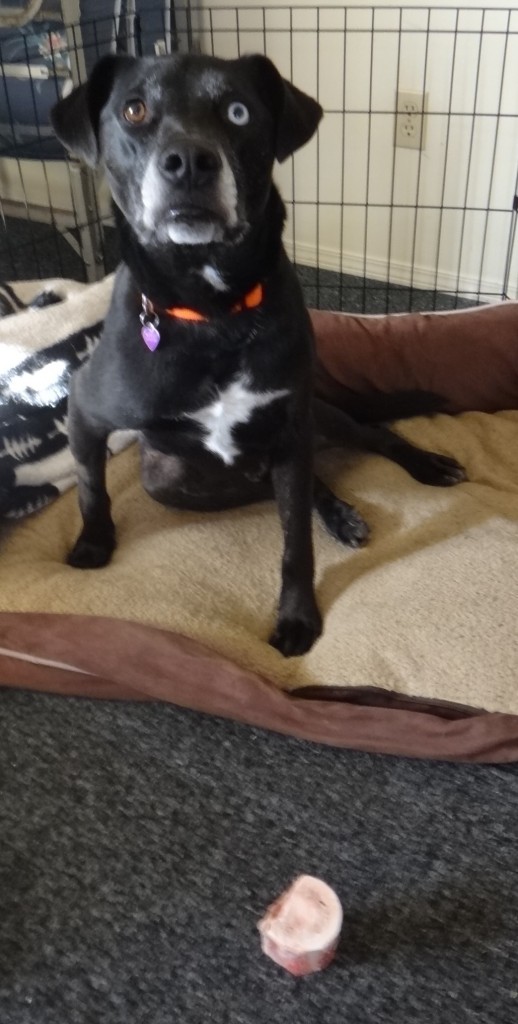 Mowat waiting for permission to grab that meaty marrow bone

What’s given me hope is stumbling across the work of Jane Killion, who lives with and trains Bull Terriers. She says that these dogs, like Mowat, with his American Bulldog genetics (we had his DNA tested), were bred to perform tasks independent of humans. Terriers, notoriously hard to train, were bred to get out there and dig for rats, while American Bulldogs were used, among other things, to hunt wild boar.

So, they look at you, think about what you’re asking of them, and then decide whether or not they really want to do it. Usually they don’t.

It’s one of my dreams to have a really well-trained dog.

It probably would have been better to have started with Oliver, our sweet German Shepherd-Collie mix who, in hindsight, would have done whatever we wanted, with proper training. He was my first dog (he came with J.), and before I lived with him, I didn’t even know that dogs sleep through the night. I thought they were like cats, roaming through the rooms at all hours, not heavy breathing bodies by your side.

Oliver was bored, I realize now, although he got lots of weekend runs and summer canoe trips. 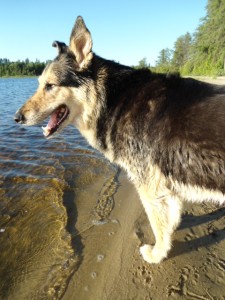 Once, we came home to discover that our IKEA couch had exploded all over the living room. Tiny bits of yellow everywhere, and Ollie with a severely downcast look on his face. We figured out that he’d dragged a bag of powdered ricotta cheese off the kitchen counter and after he shook it open on the couch, he couldn’t tell what was foam and what was cheese so he kept frantically digging. Seriously, our jaws dropped. Needless to say: end of couch.

Mowat has learned a few things in his short but difficult life. He did surprisingly well being cooped up in a puppy play-pen for six months after back-to-back knee surgeries. He knows how to stay and sit and shake a paw and drop the ball. Most of all, he knows that he must wait for a clear okay from us before eating what he’s given. Ha.

He’s a confusing boy, given to following his own whims, living the road less traveled. A bit like his people that way, I suppose, the ones he loves to sleep between, dug down under the covers, chasing after fish heads on the ice in his dreams.