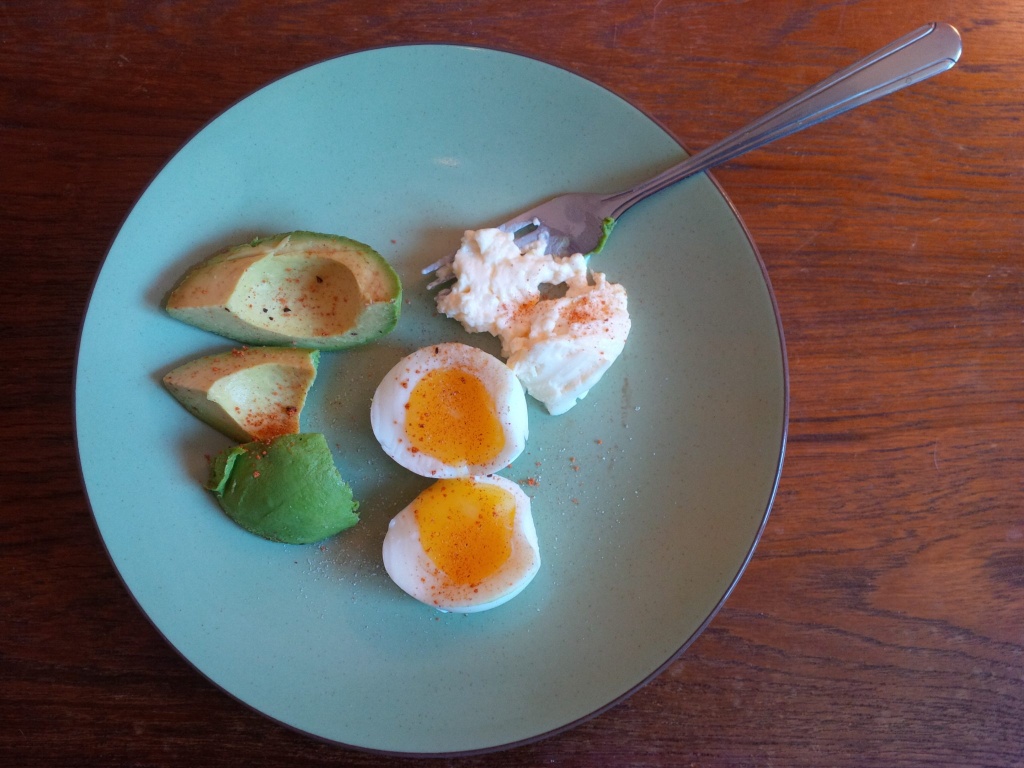 I’m in the midst of a physical and mental transformation. Don’t worry: I’m not getting plastic surgery or starting a religion. Instead, I’m figuring out how to eat in order to shrink.

You see, over the past couple of years I’ve gotten a bit, well, chubby.

Not grossly obese or unable to squeeze through doorways, but heavy, for me. The heaviest I’ve ever been. Heavy enough that my belly fat’s been getting in the way when I bend over to tie up my hiking boots and that – for someone who loves hiking – is a bit inconvenient.

So, I decided to do something about it.

Go to the gym every day? No.

When I typed ‘how to lose weight after 40’ (because even the training we did for our Scotland hike didn’t nudge much weight off so I assumed my age was getting in the way) the wisdom that is the Internet-god started tossing suggestions at me.

The first one was Diet Doctor, founded by Dr. Andreas Eenfeldt, a Swedish medical doctor. That’s when I began learning (again, because I did do a faulty version of the no-carb thing (not enough fat) when I needed to lose a quick few pounds to fit into my wedding dress many years ago) about Low Carb High Fat (LCHF) and the Ketogenic Diet.

And I realized why I’ve gotten heavy.

The number one reason?

A couple years ago, I started having smoothies for breakfast every morning. I don’t have a sweet tooth (or a stomach that likes sugar) so I didn’t over-laden them with fruit. But I did put in a banana and half a cup to a cup of berries along with lots of spinach and plain yoghurt. Pureed, this is basically un-adulturated sugar going straight into my bloodstream, spiking my insulin levels, then going into my cells (which is what glucose does – and carbs turn into glucose) to become fat.

The second reason is honey. In my coffee. Every morning. Delicious, but so, so bad (see above).

Third? Dinners and lunches featuring rice, potatoes, pasta (yes, gluten-free, one of the worst culprits because GF foods tend to be so refined – an instant glucose hit), and generally lots of those starchy foods which for a couple of hundred years (uh huh) prior to the 1960s (when cherry-picked study results began demonizing fat), people knew would help you pack on the pounds.

I’m not a fad dieter. In fact, I’m not really a dieter. I tried Weight Watchers about a year ago and all that counting? Not for me.

What I need is solid evidence and to not be hungry. Cue LCHF. I read neurologist David Perlmutter’s Grain Brain and Why We Get Fat by Gary Taubes, watched a whole bunch of doctors talking LCHF on Youtube and learned that loads of solid evidence exists to show that fat doesn’t make you fat, carbs do.

You see, when you eat a lot of carbs, your body uses the resulting glucose for energy and packs the excess away as fat. Thus, you never use your fat for fuel. When you exercise, you make yourself hungrier, so you eat more (likely – unless you allow yourself to starve which also depletes muscle) and it’s still very difficult to lose weight.

In constrast, when you eat (a lot) less carbs, your body adapts to burn fat for fuel (this is called ketosis) instead of that constant supply of carb-delivered glucose. That’s why – if you keep your carbs down – the fat, as it’s been doing for me, can melt away. 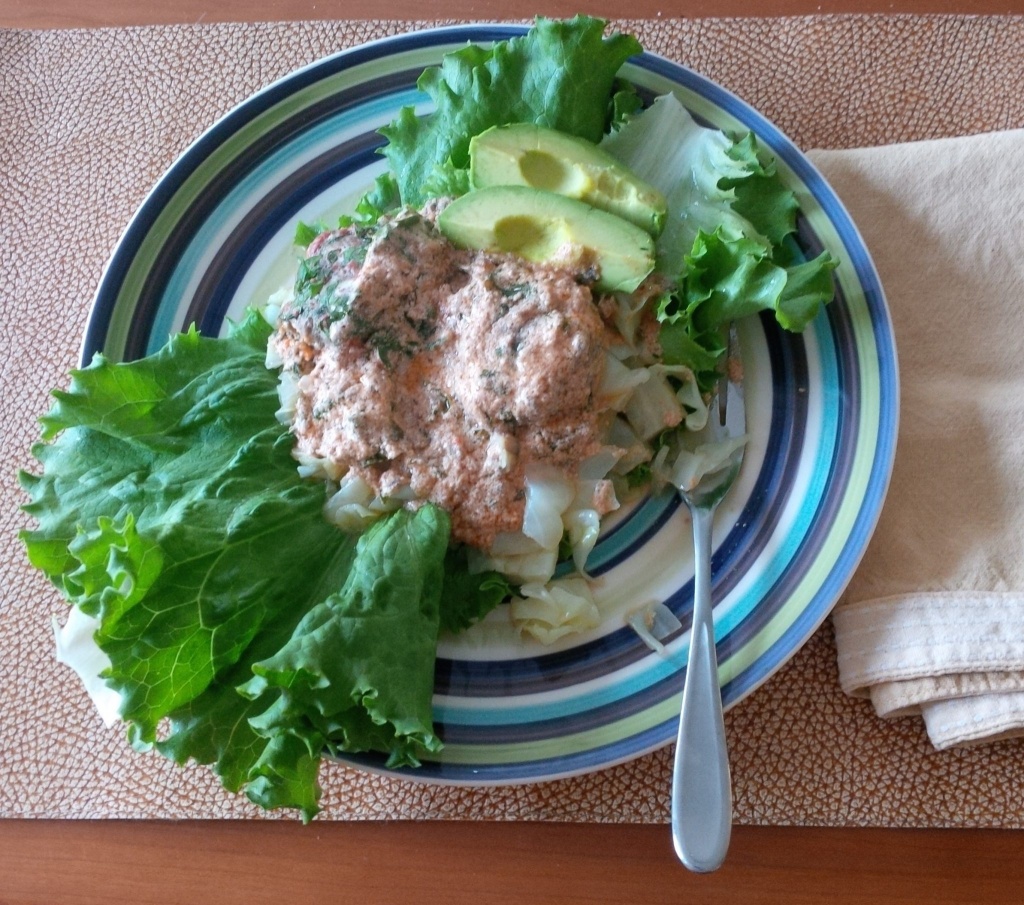 So, J. and I began. On the evening of April 3rd, we had our first low-carb meal of  hamburger patties smothered with a tomato cream-sauce and served on lettuce, with a side of cabbage sautéed in butter and half an avocado.

We’ve been eating like this since and so far, I’ve lost eight pounds and two-and-a-half inches off my waist.

I’ve been to the gym once (exercise is good for you, of course, but I’ve been busy – and in Why We Get Fat, writer Gary Taubes reviews plenty of evidence that exercise, while good for many things, won’t help you lose weight if you’re still eating lots of carbs, as I said above).

But… hold the presses.

I just got up from my desk and weighed myself again. Since I only weigh myself once a week, it’s been a few days and now I see that I’ve lost a total of 13 pounds (minus the weight of the three cups of coffee I’ve had this morning – with %18 cream, of course – I would buy the %35 stuff, but it’s two dollars more).

Thirteen pounds. In two weeks and two days when for dinner last night I had a fatty pork chop, some cauliflower rice, and Brussels sprouts, topped with butter, and a glass of red wine.

Not to mention the fact that I’ve got tons of energy, am sleeping like a hunk of concrete (due to rock-steady insulin levels, I think), and my achy knees no longer feel like I’m inching into my sixties at the age of 44.

Still, I bet I know what you’re thinking.

You’re thinking what everybody over forty thinks when somebody says, “Go on, eat the saturated fat!”

It’s valid, that concern. But it’s actually mostly valid because we’ve been taught that high LDL cholesterol blood lipid results are Very, Very Bad and have been educated with the myth that saturated fat leads to heart disease. Here’s what Gary Taubes has written in How We Get Fat:

The belief that saturated fat clogs arteries by raising cholesterol levels is a hangover from the state of science thirty to forty years ago. Back then the evidence was poor, and it is still poor. But the belief was locked into the conventional wisdom, and still is, for a simple reason: LDL and total cholesterol are the two risk factors most obviously modified by cholesterol-lowering drugs, particularly statins (which are now worth billions of dollars yearly to the pharmaceutical industry)…

So, there’s that, but also, LDL can and sometimes does go up when we eat saturated fat but we shouldn’t be blinded by that one simple fact because…

When we consider all of the effects of the fats and carbohydrates in our diet, and all of the risk factors for heart disease that have become clear as the science has evolved since the 1970s, an entirely different picture emerges.

Another part of the picture to consider is triglycerides which, when high, present a serious risk factor for heart disease. Loads of studies point out that low carb, high fat diets decrease triglycerides.

Next, is HDL, the ‘good’ cholesterol, which you want to be high because it’ll protect your heart. Same thing: it’ll go up on a LCHF diet and, says Taubes, “those of us with low HDL cholesterol [remember – you want this number to be high] are at far greater risk of having a heart attack than those of us with high total or LDL cholesterol. For women, HDL levels are so good at predicting future heart disease that they are, effectively, the only predictors of risk that matter.”

Recently, as we start to ask if – just maybe – it’s more than coincidence that the advice to eat high carb, low fat has directly corresponded with the current epidemics of obesity, cancer, diabetes, Alhzheimers (sometimes termed Type-3 diabetes), etcetera, there have been numerous studies and clinical trials done to look at the effects of low carb diets. In studying several, Taubes reports:

This is what happened to those who ate mostly fat and protein [and ate fewer than 50-60 grams of carbs a day]:

I want to emphasize that this knowledge is not new, nor is it limited to fad-oriented diet gurus. Doctors, nutritionists, scientists, medical personnel and public health professionals around the world are delving into in-depth studies investigating the benefits of eating the way we’ve actually always – up until the last two seconds of human history – eaten (ie. high fat, low carb).

Open your mind, follow the links I’ve inserted in this post, do some reading, ask the questions you need to ask. If you need a lifestyle change to address weight, diabetes, risk of heart disease, inflammation, etcetera, maybe this will work for you.

Got any questions right now? Ask me in the comments, and I can fish around in my head for the answer (drawn from all the reading I’ve been doing) or point you in the direction where you mind find it.