And the winner is…

This morning the phone rang and a wonderful woman from down south in Winnipeg told me I’d won, actually won, and FIRST PRIZE at that, the Prairie Fire Fiction contest!

Holy crap, I think I said!

Not very genteel but, you know, as a writer you send off a lot of stuff. 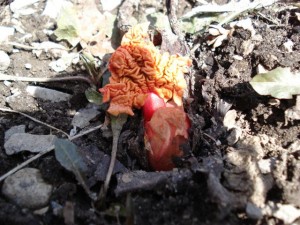 The story, Rhubarb, sprouted several years ago when a good friend of mine spotted a huge rhubarb plant at an abandoned house that cried out to be re-homed.

I dug out the original bits and pieces that I’d written after my friend dug up said rhubarb in the dead of night (that’s it, pictured above, the spring after transplanting). Holed up in a freezing cold winter, in a new community, working on final edits of Swarm, I turned it into something else (or, more specifically, IT turned ITSELF into something else, as is the way of fiction…)

The result is a story about returning home and how we grow (or remain stunted).

But you can read it yourself, because along with a whole bunch of other fine writing, it will be out in the summer issue of Prairie Fire.

Buy it at a bookstore near you (if you’re lucky enough to still have one) or order it through the Prairie Fire site (better still, subscribe!)