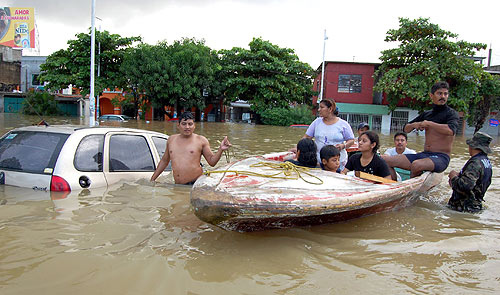 For a few days before the cyclone hit the shoreline of Bangladesh, the local weather folks were talking about it. Their normally Toronto-centric radar images had suddenly swung into the far east, pointers rising as they told us how the full brunt of the wind would hit the Ganges delta and push upriver.

And, uh, yeah, it sure did. Late last week, Cyclone Sidr hit, leaving a death toll that continues to climb. The latest numbers are reaching above 3000.

Meanwhile, back in Mexico, health officials are now fumigating a vast area of the state of Tabasco to kill mosquitos born out of flooding that has affected an estimated million people, mostly poor.

What’s all this got to do with travel? Usually, sadly, not much.

While the floods were covering Mexico and reports came swarming in about death, destruction, dire straights, I found myself reading somebody’s blog entry about great food in the most southerly North American country. And as the death toll climbs to staggering numbers in that small country on the southeastern edge of India, I cruise to another blog recounting a current journey a stone’s throw from the scene of such mind-numbing devastation. Amid discussion of how tough travelling in India is, there’s no mention of it at all.

I remember being on a press trip a few years ago into a desperate part of the United States, where jobs were nil, poverty was pretty much a tradition and tourism is viewed as the new hope. During the entire week no mention was made of said suffering until a park ranger made one slip. When asked whether they still stumble upon moonshine stills in the woods, she said, “these days, it’s more likely to be crystal meth labs.”

That one moment of truth brought the whole place to life for me.

Right then I was able to see the people, to share in their experience, to become rooted in what life must be like for them. And this, I feel, is what travel should be about – a sharing of place, its trials and its great tribulations. Not an insulated journey that involves us simply staring out of ourselves, still locked in our own home, despite being thousands of miles away.

Photo by Selena Mora. See more photos of the flooding in Tabasco at http://www.flickr.com/groups/tabascodisaster